Sir Isaac Newton came up with one of the heavyweight laws in physics for you: the law of universal gravitation. This law says that every mass exerts an attractive force on every other mass. If the two masses are m1 and m2 and the distance between them is r, the magnitude of the force (F) is

On the land-based end of the spectrum, say that you’re out for your daily physics observations when you notice two people on a park bench, looking at each other and smiling. As time goes on, you notice that they seem to be sitting closer and closer to each other each time you take a glance. In fact, after a while, they’re sitting right next to each other. What could be causing this attraction? If the two lovebirds have masses of about 75 kilograms each, what’s the force of gravity pulling them together, assuming they started out 0.50 meters away? Your calculation looks like this: 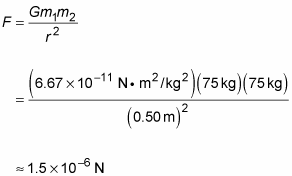 The force of attraction is roughly 5 millionths of an ounce. Maybe not enough to shake the surface of the Earth, but that’s okay. The Earth’s surface has its own forces to deal with.