How to Calculate the Torque Needed to Accelerate a Spinning Disc

You can use physics to calculate the amount of torque needed to accelerate (or decelerate) the speed of a spinning disc. Without the ability to change the speed of a disc, it would be impossible for you to watch a movie on your DVD player.

Here’s an interesting fact about DVD players: They actually change the angular speed of the DVD to keep the section of the DVD under the laser head moving at constant linear speed.

A DVD is a disk shape rotating around its center, which means that its moment of inertia is

The diameter of the DVD is 12 centimeters, so the radius is 6.0 centimeters. Putting in the numbers gives you the moment of inertia:

How about the angular acceleration,

Here’s the angular equivalent of the equation for linear acceleration:

Similarly, you can get the final angular velocity this way: 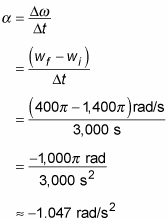 You’ve found the moment of inertia and the angular acceleration, so now you can plug those values into the torque equation:

To get an impression of how easy or difficult this torque may be to achieve, you may ask how much force is this when applied to the outer edge — that is, at a 6-centimeter radius. Torque is force times the radius, so

Slowing down the DVD doesn’t take much force.