How to Calculate a Spring Constant Using Hooke's Law

Explore Book Buy On Amazon
Any physicist knows that if an object applies a force to a spring, then the spring applies an equal and opposite force to the object. Hooke’s law gives the force a spring exerts on an object attached to it with the following equation:

The minus sign shows that this force is in the opposite direction of the force that’s stretching or compressing the spring. The variables of the equation are F, which represents force, k, which is called the spring constant and measures how stiff and strong the spring is, and x, the distance the spring is stretched or compressed away from its equilibrium or rest position.

Understanding springs and their direction of force 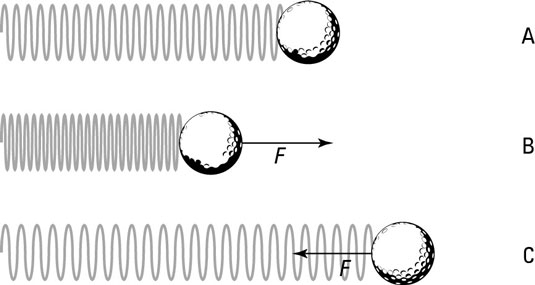 The direction of force exerted by a spring
The preceding figure shows a ball attached to a spring. You can see that if the spring isn’t stretched or compressed, it exerts no force on the ball. If you push the spring, however, it pushes back, and if you pull the spring, it pulls back.

How to find the spring constant (example problem)

Suppose that a group of car designers knocks on your door and asks whether you can help design a suspension system. “Sure,” you say. They inform you that the car will have a mass of 1,000 kilograms, and you have four shock absorbers, each 0.5 meters long, to work with. How strong do the springs have to be? Assuming these shock absorbers use springs, each one has to support a mass of at least 250 kilograms, which weighs the following:

where F equals force, m equals the mass of the object, and g equals the acceleration due to gravity, 9.8 meters per second2. The spring in the shock absorber will, at a minimum, have to give you 2,450 newtons of force at the maximum compression of 0.5 meters. What does this mean the spring constant should be? In order to figure out how to calculate the spring constant, we must remember what Hooke’s law says:

Now, we need to rework the equation so that we are calculating for the missing metric, which is the spring constant, or k. Looking only at the magnitudes and therefore omitting the negative sign, you get

Time to plug in the numbers:

The springs used in the shock absorbers must have spring constants of at least 4,900 newtons per meter. The car designers rush out, ecstatic, but you call after them, “Don’t forget, you need to at least double that if you actually want your car to be able to handle potholes.”