The Spinal Cord: The Intermediary between Nervous Systems

By: Frank Amthor and
Updated: 09-11-2016
From The Book: Neuroscience For Dummies

The spinal cord also has integration and coordination functions, although it is close to the lowest level of the hierarchy of controllers. It mediates feedback between sensory and motor pathways for each limb and coordinates limb movements for locomotion.

The spinal cord segments are designated as 8 cervical, 12 thoracic, 5 lumbar, 5 sacral, and 3 coccygeal. These are numbered from the top down, so the highest cervical spinal segment is C1, while the lowest sacral segment is S5.

Looking at the spinal reflex

The fundamental unit of coordinated action mediated by the spinal cord is the spinal reflex; you can see the anatomy of this reflex in Figure 2-6. Striking the kneecap stretches the quadriceps muscle, as though one's knees were buckling. Muscle spindle receptors in the quadriceps project to the spinal cord, and, through interneurons, activate alpha motor neurons that contract the muscle to maintain upright posture. 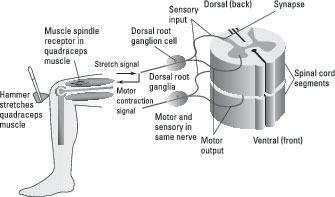 On the dorsal side of the spinal cord are the axons of sensory cells, such as stretch receptors, that enter via the dorsal root.

When the doctor taps just below your kneecap with a rubber hammer, the tap slightly stretches the tendon from your knee to your foot, stretching the quadriceps muscle and spindle, which causes your leg to extend in compensation. This test checks the integrity of your peripheral nervous system (sensory and motor nerves acting through the spinal cord).

What doesn't the figure show? It doesn't show several pathways connecting a spinal cord segment to other segments, and to the brain:

Getting your muscles moving

How do muscles work? Muscles are groups of cells connected to each other in long parallel chains the ends of which are connected to bones by tendons. The muscle cells contain chains of proteins called actin and myosin. When these proteins are stimulated, they slide over each other, causing the cell to contract along its length.

Alpha motor neurons provide the stimulation by releasing the motor neuron neurotransmitter acetylcholine. When the acetylcholine is received by the receptors on the muscle cells, it causes a muscle cell action potential (an electrical pulse in the cell that causes it to momentarily contract) that causes the actin-myosin to slide (through the raising of intracellular calcium concentration), which in turn causes the contraction.