By: John Pezzullo and
Updated: 03-26-2016
From The Book: Biostatistics For Dummies

The proportion of subjects having some attribute (such as responding to treatment) can be compared between two groups of subjects by creating a cross-tab from the data, where the two rows represent the two groups, and the two columns represent the presence or absence of the attribute. In biostatistics, this cross-tab can be analyzed with a chi-square or Fisher Exact test.

To estimate the required sample size, you need to provide the expected proportions in the two groups. Look up the two proportions you want to compare at the left and top of the following table. (It doesn’t matter which proportion you look up on which side.) The number in the cell of the table is the number of analyzable subjects you need in each group. (The total required sample size is twice this number.)

For example, if you expect 40 percent of untreated subjects with a certain disease to die but only 30 percent of subjects treated with a new drug to die, you would find the cell at the intersection of the 0.30 row and the 0.40 column (or vice versa), which contains the number 376. So you need 376 analyzable subjects in each group, or 752 analyzable subjects altogether. 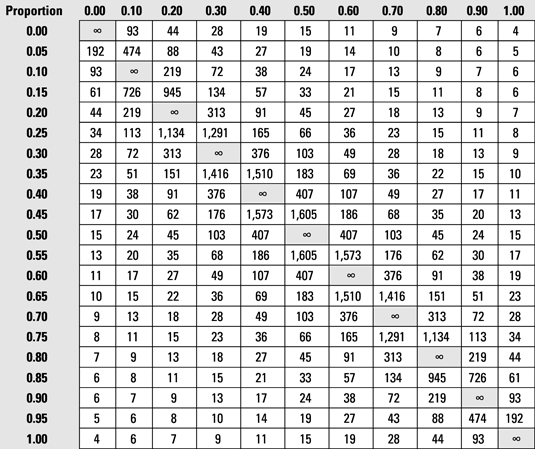