How to Play Scottish Reels on the Fiddle

Reels originated in Scotland and later became part of other styles of fiddling, such as Irish fiddling. Reels are played fairly quickly and crisply. A Scottish reel has an even-structured driving rhythm, and the time signature is written in either 4/4 or 2/4.

Reels accent beat 1 and 3 of each measure. This applies to Scottish reels as well. But Scottish reels differ from others in the type of rhythms used, the bowing patterns, and the quickness of the grace notes. The first song you see is the simplest and most well-known reel. It’s called “The Devil’s Dream.”

As you can see, some slurs have been suggested in this song. Because this tune is played very fast, you’ll find that many of the notes are played separately, but it’s okay to slur here and there. Make sure you accent beats 1 and 3. Listen to “The Devil’s Dream” played slow. 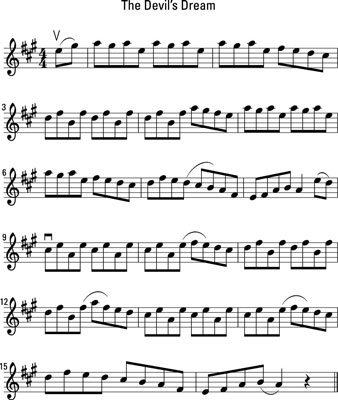 Now listen to “The Devil’s Dream” played at a fast speed. You won’t believe how fast this one is eventually supposed to go!

One technique that’s similar to the Irish style is the Scottish triplet. This is characterized by three quick notes typically played before the first beat of a measure. You’ll notice this in the next song, “The Flowers of Edinburgh.” This tune has a lot of ornaments added, including grace notes, slurs, and turns.

Usually, these triplets are played near the tip of the bow, starting with a down-bow. Having a loose and relaxed bow hand will help you tremendously.

Not sure what the symbols at the end of the piece mean? These are turns.

Scottish music is meant to be bold and heavy, so make sure that you aren’t getting any airy type of sound when you play this piece. Really dig in with your index finger into the bow, making good contact to get that “dirty” type of sound. You don’t want to squeak, but getting a thick sound is what this style is all about.

Now listen to “The Flowers of Edinburgh” played at moderate speed. 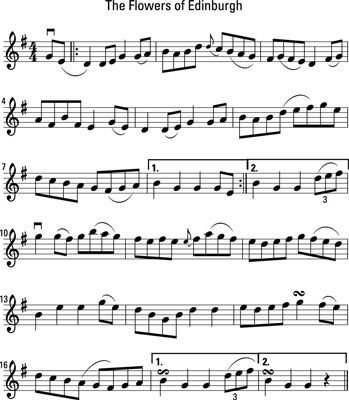