How to Play Fiddle Slurs Properly in Irish Jigs

Now take a look to see what slurs look like in Irish music. This is an example of where slurs often happen, but by no means do they need to happen every time. Variation is key to getting a unique fiddle sound! These spots are good spots to at least start with and show you the difference between classical and Irish styles.

Creating your own unique sound is very important when getting into the Irish style. In other words, each time you play a piece, it’s okay to do the ornamentation a little differently. For example, you could slur a total of four times the first time through the tune and then the second time only do it once.

Bowings are much more laid-back in Irish fiddling. You can start doing a piece up-bow one time and then do it down-bow another time. This can give different flavors to the way a song sounds and makes Irish fiddling much more flexible than classical violin.

Here is one of the most famous Irish jigs, “The Irish Washerwoman.” This is a song every Irish fiddler should memorize. As you can see, there hasn’t been any ornamentation added into this jig. 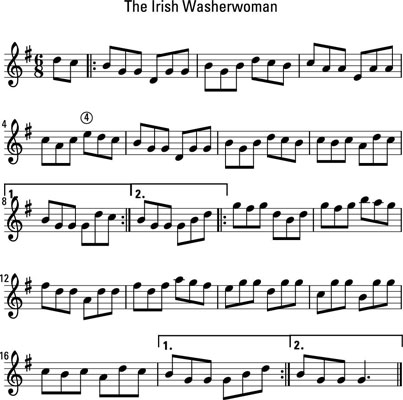 Hopefully, you have the notes memorized after some intense practice and are ready to put in some ornamentation. That means it’s up to you to put in the slurs and accents in spots you deem fit. Here’s a recap of the best spots to put in accents and slurs:

If you want some ornamentation, listen to “The Irish Washerwoman” with a few slurs put in. This is the way that many fiddlers play this song, with the 6th beat of a measure often slurred to the first beat of the next measure.

Including ornamentation in some jigs is a little tricky. Here is a jig called “Haste to the Wedding” that’s famous all across Ireland — is one such piece. 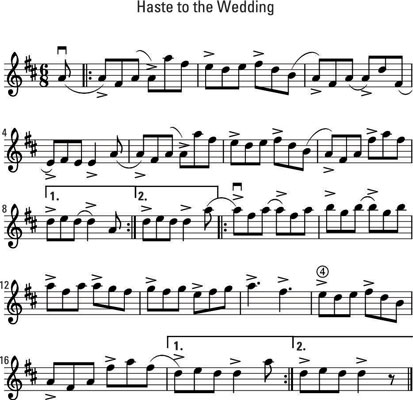 The tricky part about putting ornamentation in this song is that the spots where you put accents in are identical notes. This means you should use your index finger to press down into the bow to create a difference in sound between two notes played in the same bow stroke. Here’s how to do this:

Now, listen to “Haste to the Wedding” at a slow speed with the ornamentation of the same note.

No jig sounds good when it’s slow. When you start to get the hang of the notes and have played “Haste to the Wedding” over and over, you’ll want to speed it up. Good luck!