How to Play Advanced Double-Stops on the Fiddle

Sometimes you’ll see various combinations of double-stops in fiddle tunes. Some are harder than others to play, and the difficulty isn’t just because of the notes but the rhythms and notes you have to play before the double-stop. Jumping around is possible, as well as using different finger positions to satisfy certain double-stops.

Here is a popular intro in fiddle music that sounds best when you combine double-stops. Doing so requires some unique positioning of your fingers.

Follow these steps to play this intro line with double-stops:

The double-stop that usually follows this intro is done by taking your 3rd finger, which was on C♯, and sliding it up to D. You’ll see this in the song that’s coming up. After you play the first ending, you’ll play the first note of the song, which is the double-stop.

Here is a tune with some difficult double-stops, including the intro that you just learned. The song is called “Fairview County.” 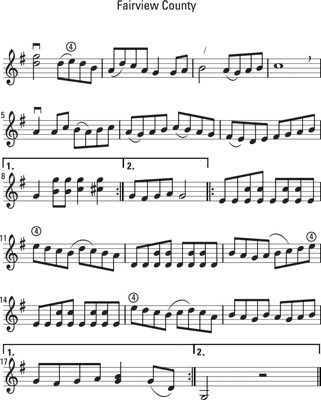 Now listen to “Fairview County” played at a slow speed. Apply the double-stops if you can.

It’s totally fine to learn just the top notes of a piece before applying the double-stops. It takes time to develop a clean sound with them, and sometimes you have to work on the rhythms and basic notes first before adding in double-stops. The more you do them, the easier they’ll get. Don’t just disregard them either; they really add flavor to a fiddle tune!