How to Create a Great Sounding Reel on the Fiddle

The most popular type of Irish fiddle style (by far) is the reel. This style is played often in Irish sessions and is called a reel because the time signature is played in “real” time, which is 2/4 or 4/4. This is different from jigs, which are typically written in 6/8 or 9/8 time.

To create a great sounding reel, you must first understand where the accents lie. The arrangement is much different from the polka style because in reels the accents lie on the beat.

A grace note is a very quick note that happens right before a base note and fits well in different musical styles, including Irish reels. Take a look at the musical line. It has two grace notes, which are indicated by the smaller than usual notes.

When putting in grace notes, it’s important to understand the base structure of the musical part. Here’s how to play the line with grace notes:

Having your fingers close to the fingerboard is very important to play the grace note quickly. Also, having good fundamentals in your left hand is important so you don’t have to work harder than you really need to.

Check out this Irish reel called “The Mason’s Apron.” This song has some grace notes and includes some suggested slurs.

This piece has a lot of tricky crossover slurs. Start by just learning the base notes of the piece, and even take the grace notes out at first if you need to. The slurs and grace notes are considered ornaments, so they’re just extra parts that make the song sound more like the Irish style. If you’re more of a beginner player, you especially want to work on notes and rhythms first. 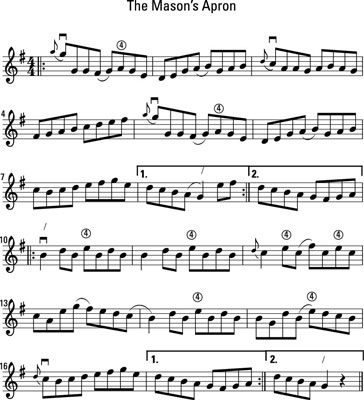 Make sure you don’t skip the 4th fingers to avoid unnecessary crossovers in the song.

Now, listen to “The Mason’s Apron.” Notice how the emphasis (accents) is on the off beats.

One thing you can add to “The Mason’s Apron” and other songs to add a little different flavor is triplet runs at the beginning of the song. A triplet is three notes that are combined together to equal one beat. So, instead of two eighth notes to start a piece (which also equals one beat), you can do a triplet run (three notes).

This is how the first two measures would look if you added a triplet run.

As you can see, there is a triplet run added to the end of the line. This shows that you can add triplet runs anywhere in an Irish piece for more variation.

Now listen to this triplet run to hear how it should sound on a fiddle. Notice that the triplet notes are played a little bit faster than if you were to play two eighth notes (you have to fit three notes into one beat instead of two).