How to Restring a Ukulele

Explore Book Buy On Amazon
Restringing your ukulele can seem like one of those jobs to put off as long as possible, like homework, exercising, or visiting the dentist. But changing the strings isn’t as bad a job as it seems, and you’ll feel better afterwards (and unlike those other jobs, it adds to, rather than takes away from, valuable ukuleling time).

You need to restring your uke periodically for the following reasons:

When to Restring Your Ukulele

I can’t give you a set amount of time between string changes. It depends on how often they’re played, what kind of strings they are, and even the chemical composition of your sweat. Some musicians prefer the sound of old strings (and so delay changing them) and some prefer newer strings.

Replacing your strings when they start sounding dull to you is probably the best thing to do.

A good indication that your strings need replacing is finding notches in your strings where the frets touch them. By this stage, they’ll have passed sounding their best and you’ll start to develop tuning problems.

The other time to replace strings is when you buy a new uke only to discover that it has a useless set of strings on it (something I’ve experienced several times). Putting on a high-quality set of strings (such as Aquila or Worth) is the quickest and cheapest way to improve the sound of any ukulele.

Never put steel strings on a uke; it isn’t built to take them.

Before putting on your pristine set of new strings, you have to remove the old ones! If you’re in a massive hurry to change strings — such as finding that they’re damaged or sound awful just before a performance — you can just cut them without too much risk. But far better is to unspool the tuning pegs until you have enough slack to pull the strings off.

I prefer to change strings one at a time (because the other strings give you something to tune to) but by all means take them all off together. And raise a quizzical eyebrow to anyone who tells you that removing them all at once causes problems with tension.

If you’ve removed all the strings, take the opportunity to clean the hard-to-reach areas underneath them.

Tying the Strings at the Bridge

A bridge holds the strings in place. Ukuleles have two main types of bridges: Both types of bridges have a saddle: a strip – traditionally made of ivory but now thankfully plastic – on which the string sits, and that’s the start of the section of the string you play.

Slotted bridges are dead simple to use. Just tie a knot in one end of the string (as simple as making a loop and threading the end through) and thread it through the slot so that the knot holds the string in place.

Tie-on bridges are a complete pain in the saddle-end. Here are the steps to take:

The last time the string passes under itself, it has to be at the back of the bridge. If it’s on top, the string will probably refuse to hold its tuning.

Looping the Strings Around the Tuning Pegs 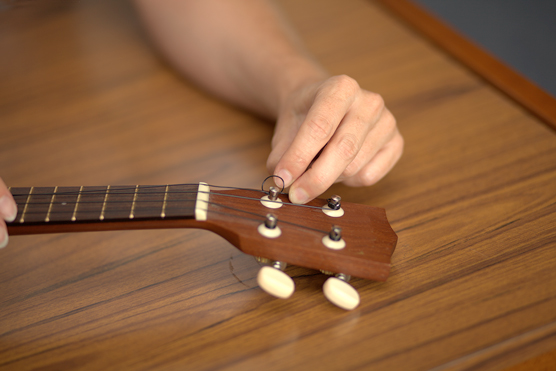 Looping the string around the tuning peg.

Pull the string taut before you start tuning. The more string you wrap around the tuning pegs, the messier the process becomes and the less likely your uke is to stay in tune.

Check that the string is sitting neatly in its notch in the nut and start tightening the tuning pegs. As the string does a full circuit, make sure that it goes under the previous row. You want the string to come off the peg lower down so that it leaves the bridge at a steeper angle and is less likely to slip.

Very recently, ukuleles have started to be made with classical guitar-style slotted headstocks. If your ukulele has one of these, the process of attaching the string is very similar to the preceding process. The only difference is that, after you thread the string through the hole, loop it around the string (to create a U-shape); the string then tightens down as you tune it up.

Ukulele strings take time to bed-in and keep in tune, and so make sure that you give them a stretch when you put them on to speed up the process. When the string is on and in tune, pull it away from the body and give it two or three little tugs.

The string is likely now to be out of tune. Tune it up and repeat the process until it holds its tuning (or until you’re bored out of your brain-box).