Playing the Piano: Adding Time to Musical Notes with Ties and Dots

In music, ties and dots are symbols that add more time or length to the notes you play on the piano. If a quarter or half note doesn’t quite cut it, the composer throws in some of these value-adding notations.

The tie does just what it sounds like: It ties two notes of the same pitch together, causing one continuous-sounding note. For example, a whole note tied to a quarter note lasts for five beats. Likewise, a quarter note tied to an eighth note is held for one and a half beats. 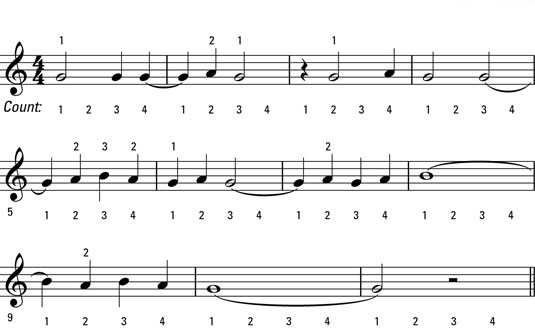 Ties that bind notes of the same pitch.

Be careful not to mistake a tie for a slur. They look similar because they’re both curved lines, but a tie connects two notes of the same pitch from notehead to notehead. In contrast, a slur connects notes of different pitches.

Another way to extend the length of a note, not to mention to make it look a little fancier, is through the use of a dot. A dot on any size note or rest makes that note or rest last 50 percent longer.

A quarter note lasts one beat, a half note lasts two, and a whole note lasts four. You can see that you’re in need of a note that lasts three beats. Probably the most common dotted note in music is the dotted half note, which gets a total of three beats:

The dotted half note.

Dots also get added to other notes: