Musical Keys and the Circle of Fifths

There’s a method to the madness of key signatures that makes your piano playing easier. The Circle of Fifths is an order that starts with no sharps and flats and cycles the ring of keys to all twelve keys. As you travel around the circle, you find each of the 12 keys in the tonal system. The numbers inside the circle tell you the number of sharps or flats in each key signature: 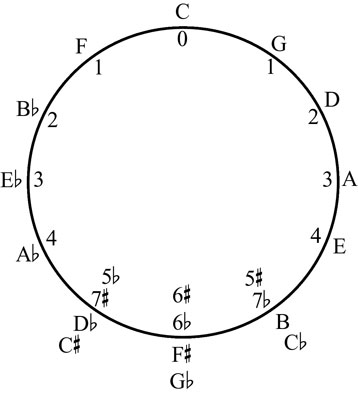 The Circle of Fifths with the letter names for each possible home key.

Note the following important points about the Circle of Fifths:

The Circle shows the relationship of the keys to each other. Neighboring keys have a lot in common, like seven of eight scale tones. Very often a song travels smoothly to a neighboring key during its musical journey. The keys farthest away from each other have little in common, and a musical journey from one side of the Circle directly to the opposite side sounds quite abrupt.

The order of sharps and flats as they’re written on the grand staff follows the Circle of Fifths, adding a sharp or flat in the same order as the Circle.

To read a key signature that contains sharps:

For example, if you have two sharps, F-sharp and C-sharp, the last one is C-sharp. Up a half-step from C-sharp is D. The song is in the key of D.

To read a key signature that contains flats:

For example, if you have three flats in a key signature — B-flat, E-flat, and A-flat — the next to the last one is E-flat, and the song is in the key of E-flat.