How to Build Musical Chords on the Piano

You can build the chords you play on the piano yourself. You start with a root note, the lowest note of the chord, then stack notes on top in intervals to make the type of chord you want, whether that’s the popular major and minor chords or the less common augmented, diminished, and suspended chords.

Use fingers 1, 3, and 5 to play most chords — certainly major and minor chords. If you’re playing left-hand chords, start with the pinky finger of your left hand (LH 5) on the root note. For right-hand chords, play the root note with RH 1 — your thumb.

Starting out with major chords

Major chords are perhaps the most frequently used, most familiar, and easiest chords to play. It’s a good bet that most folk and popular songs you know have one or two major chords.

Branching out with minor chords

Like the major chord, a minor chord is a triad comprised of a root note, a third interval, and a fifth interval. Written as a chord symbol, minor chords get the suffix m, or sometimes min.

Minor, but not insignificant, chords.

Don’t be fooled by the name “minor.” These chords are no smaller or any less important than major chords. They’re simply built on minor scales, rather than on major scales. Minor chords are to major chords as shadow is to light, the yang to the yin.

You can make a minor chord two different ways:

Tweaking the fifth for augmented and diminished chords

When writing the chord symbol, the suffixes for augmented chords include +, aug, and #5.

A diminished chord contains a root note, a minor third (m3) interval, and a diminished fifth (dim5), which is a perfect fifth (P5) interval lowered one half-step:

You may find it easiest to use fingers 1, 2, and 4 (thumb, index, and ring) for augmented and diminished chords played with the right hand. For the left hand, try 5, 3, and 2 (pinky, middle, and index).

Another popular type of three-note chord, although it’s technically not a triad, is the suspended chord. The name means “hanging,” and the sound of a suspended chord always leaves you waiting for the next notes or chords. 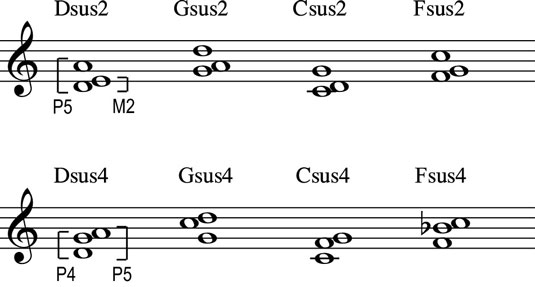 The two types of suspended chords are the suspended second and the suspended fourth. Because of their abbreviated suffixes, these chords are often referred to as the sus2 and sus4 chords; you see them written as Csus2 or Asus4, for example. To create them:

The sus4 is so popular that musicians often just call it the sus chord. So, when the bandleader says to play “a sus chord on beat 1,” that probably means to play a suspended fourth.