One of the most important things you can learn as a piano player is an assortment of left hand accompaniment patterns. Here are a few excellent and professional-sounding left-hand patterns that you can apply to just about any song you come across. Each of these patterns is versatile — applicable to both 3/4 and 4/4 meters — not to mention user-friendly.

A chord-based approach, whether played straight or with arpeggios, serves as an excellent introduction to left-hand accompaniment.

Start with the basic chords and find inversions that work well for you without requiring your left hand to move all over the keyboard. Also experiment with various rhythmic patterns. For example, try playing quarter-note chords instead of whole-note chords. Or try a dotted quarter- and eighth-note pattern.

The left hand plays a simple chord progression with several different rhythmic patterns. Run through these a few times and decide which rhythmic pattern works, sounds, and feels best to you. 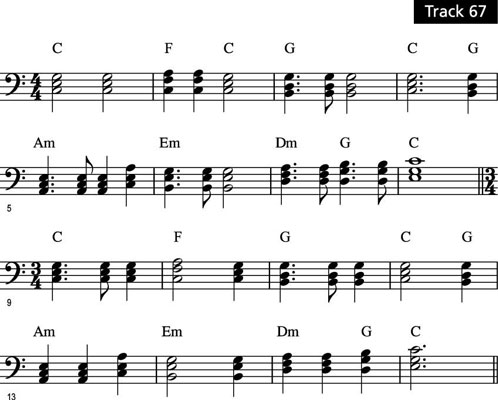 You can change the texture and add some variety with a constant arpeggiated pattern in the left hand. For every chord symbol you see here, use the root, fifth, and octave notes of the chord’s scale to form an up-and-down pattern throughout the song. This pattern works for fast or slow songs. 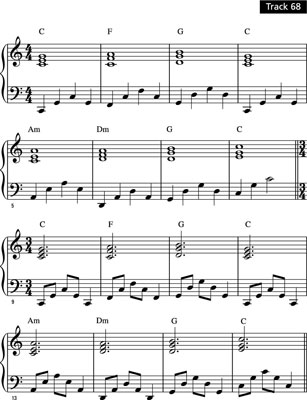 In addition to slamming octaves, a nice rock ’n’ roll-sounding bass pattern may use other intervals drawn from scale notes.

You can create a great bass pattern using the octave, fifth, and sixth of each chord. Try this high-energy accompaniment along with “Rockin’ Intervals.” You can modify the pattern to fit a two- or one-measure pattern in 4/4 meter. After a few times through, your hands will know what to do, and you can apply the pattern to any major chord. 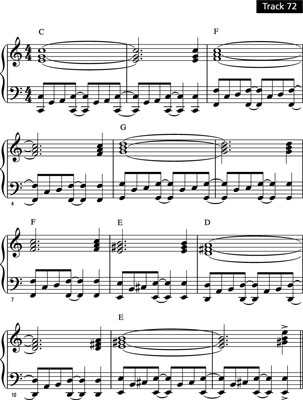 The great Chuck Berry made the locomotive-sounding pattern demonstrated in “Berry-Style Blues” very popular on the guitar. It was only a matter of time before some trailblazing pianist adapted this guitar pattern to the piano. All you have to do is alternate between playing an open fifth and an open sixth on every beat. 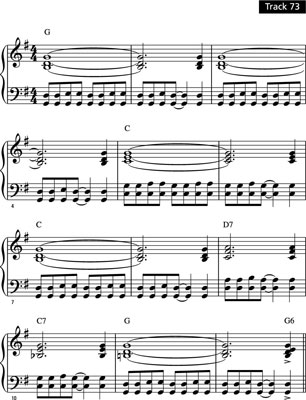 Some left-hand patterns are so widely used that they’re better known than the melodies they accompany. “Bum-ba-di-da” is one such pattern that was made famous by Roy Rogers in his show-closing song “Happy Trails.” All you need are three notes from each chord’s scale: the root, fifth, and sixth. Play them back and forth, over and over. 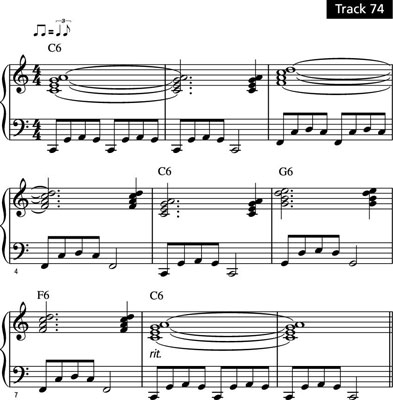 Check out a good sampling of these left hand accompaniment patterns.

Another melodic left-hand pattern played by every pianist from novice to pro is the “boogie-woogie” bass line. It doesn’t even need a melody. This bass line uses notes from a major scale but lowers the seventh note of the scale a half-step (also called a flatted seventh) to give you that bluesy sound.

For each new chord in the boogie-woogie bass line, you play the following scale notes up the keys and then back down: root, third, fifth, sixth, flatted seventh. 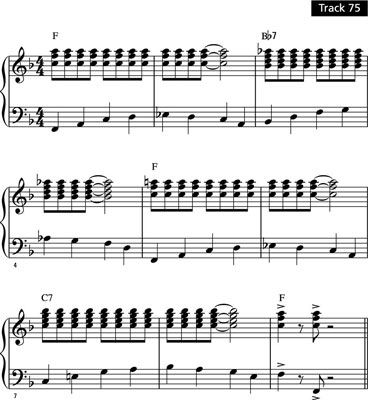