Which Microphone Should You Use to Amplify Your Harmonica Sound?

As a harmonica player, you have many choices among vocal mics and mics designed for harmonica. The two most popular types used to amplify sound are vocal mics and bullet mics.

Vocal mics work well for harmonica. They deliver a clean, natural-sounding signal that can be processed to give a wide variety of sounds, from clean and airy to distorted and boxy.

When you look for a vocal mic, make sure that it has these characteristics:

Two characteristic of vocal mics that can affect the harmonica’s sound are:

Vocal mics often used by harmonica players include the Shure SM57, SM58, 545 series, and PE45, and the Electro-Voice RE10, while the Audix FireBall is a mic with no proximity effect that was adapted for clean, uncolored harmonica sound by altering a vocal mic design.

Bullet mics, named for their characteristic stubby, bullet-like shape, were designed to deliver spoken communications with maximum efficiency in noisy environments, such as bus stations. Blues harmonica players prize the harsh yet muted tonal colors of these primitive mics, together with the distortion they can get from a cupped bullet mic.

The two classic bullet mics are the Shure Green Bullet and the Astatic JT-30. Once cheap and commonly available, these models are rapidly becoming pricey collectors’ items. Modern imitations look cool and aren’t expensive, but they don’t deliver the classic sound.

Unless you have the bucks to spend on a well-maintained vintage mic or a custom job, you’re better off using a vocal mic and using effects and the amplifier itself to color your sound. 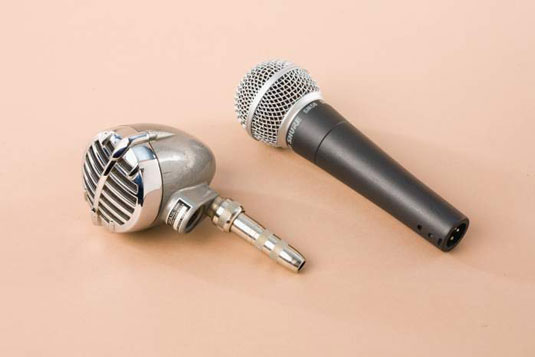