Playing Scales on the Harmonica

Playing scales on the harmonica can be very useful. If you take two notes an octave apart and add some of the pitches that lie between them, you’ll have a scale. With 12 different pitches to choose from, you have endless possibilities. However, most music uses a few standard types of scale.

You can describe the notes in a scale in one of three ways:

Take a look at the step pattern for a major scale and the interval qualities for the scale degrees in relation to the tonic. The scale shown is the C major scale, but the pattern and relationships are the same for all major scales. 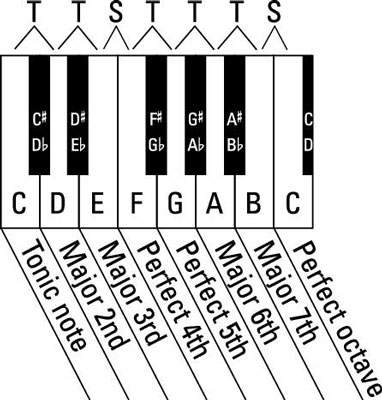 The scales available on a C-harmonica fall into three groups: major, minor, and weird (at least until you get to know them). Major and minor scales have several distinguishing characteristics.

Scales with a major character

A scale that’s major in character has these characteristics:

Scales with a major character that are built into a C-harmonica are:

Scales with a minor character

A scale that’s minor in character has these characteristics:

Scales with a minor character built into a C-harmonica are:

The natural-note scale of B has a minor third, but it’s unique in that it has a diminished fifth, which makes it hard to work with.

C major and A natural minor use the same set of notes, but by centering those notes around one tonic or another, the scale becomes major or minor. When a major scale and a natural minor scale share the same notes, the major scale is called the relative major and the minor key that shares those notes is called the relative minor.

Playing in minor keys on the diatonic harmonica

While you can buy harmonicas tuned to minor keys, most harmonica players play in minor keys by playing a standard major-key harp and choosing one of its scales that has a minor third degree. This means, for instance, playing a C-harp in D minor, A minor, or E minor.

You can take any note in a scale and designate it as the tonic. Each resulting scale is called a mode. If a scale has seven notes, it has seven different modes (or modal scales). Because most scales have step patterns that include a mix of whole tones and semitones, each mode has a different set of interval qualities.

On the diatonic harmonica tuned to the C major scale, you also have modal scales for D, E, F, G, A, and B — seven different scale flavors. Each of these modal scales gives you the basis to play that C-harmonica in several different keys, each with its own scale flavor.