How to Amplify Your Harmonica Sound through a Microphone

The first time you play harmonica with amplification, you’ll probably play into a microphone that’s connected to a sound system. Usually the mic will be a vocal mic — a mic you would use for singing. And that’s fine; mics that work well for vocals usually work well for harmonica.

Playing into a microphone on a stand

When you play harmonica through a sound system, the microphone is usually on a stand, ready to amplify the voice of someone speaking or singing (or playing harmonica). Here are some pointers for getting the most out of using a mic on a stand to play tharmonica.

Your first microphone experience may not involve a stand, however. Someone on the stage may hand you a microphone to cup in your hands along with the harmonica. In that case you need to know how to handle the situation.

Playing with a microphone cupped in your hands

Harmonica players often cup the harmonica and the mic together in their hands (perhaps a vocal mic or a bullet mic). Cupping a mic when you’re playing through a sound system gives you a sound that’s similar to that of a natural harmonica, but stronger and more concentrated.

Cupping the mic has the following positive effects:

Cupping the mic also causes other effects that you may or may not want. Consider the following:

Don’t grab a mic to cup in your hands without letting the sound tech know first. He needs to know so he can turn down the volume on that mic. Otherwise you may hurt everyone’s ears and even damage the speakers, either with some very loud harmonica notes or with feedback.

Always hold the mic one finger width away from the harp. Doing this keeps the harp from bumping the mic and making noise. You also create a small tone chamber that you can work for tonal effects by changing the shape of your hand cup around the harp and mic. 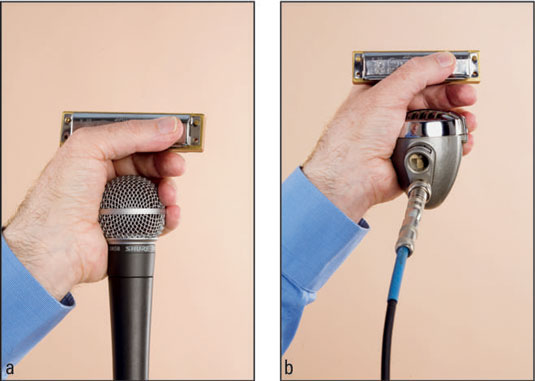 Hearing yourself through the chaos

The first time you play on stage, you may have a difficult time hearing yourself and other players because of loud amplifiers, audience noise, and the distance between you and the other musicians. And when you can’t hear yourself, you may lose your place on the harp and play wrong notes.

However, a good sound system provides monitors, which are little speakers on the stage floor that are aimed up at you so you can hear yourself. If there’s time before your performance, ask the sound tech to do a sound check.

If you can’t hear yourself while you’re playing, you can do two things:

With high sound levels on stage, you may feel overwhelmed, and then you may start pushing too much air into the harp. Resist the urge to honk, screech, or beat up on the harp. If you play at a normal level, you’ll have better control of the harp, and you’ll sound better too.

Avoiding the dreaded howl of feedback

Feedback is the painfully loud howling sound that overwhelms a room when a microphone “hears itself.” Feedback happens when the mic picks up a sound, feeds that sound through a speaker, and then picks up the same sound again and starts feeding it back through the system again.

Feedback happens in the following situations: