When you learn a new tune, what key of harp do you use? The key of the tune is just the beginning because the scale may not be the major scale. The first thing to figure out is the tune’s key. This may be written down somewhere.

You may have to look at a piece of sheet music or a chord chart. Or you may have to just listen and try to identify the key note intuitively.

What are the notes in the scale?

If you have written music for a song, look at the very beginning of the tune to see the key signature, a group of sharps or flats clustered together at the beginning of each line. The key signature tells you which notes need to be played always sharp or always flat so that the scale has the right notes for the song’s key.

Even if you don’t read music, you can deduce the key of the song from the key signature by comparing the number of sharps or flats with this chart.

What are the notes in the chords?

Say you’re having trouble choosing a harp for this chord chart. 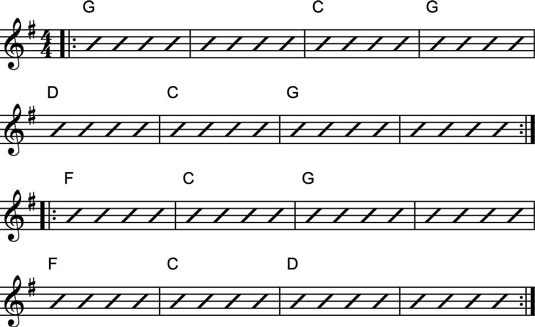 The tune is in the key of G, but when you try a G harp, some of the notes on the harp don’t seem to fit with some of the chords. Here’s one way to arrive at a good harp choice:

For example, the tune above has the chords G, C, D, and F. Here’s a breakdown of the notes in those chords:

When you put the chords in alphabetical order, they look like this:

This scale almost matches the scales of a G-harmonica and a C-harmonica. The G-harp has F♯ but not F, and the C-harp has F but not F♯. At least now you know that the F chord and F note are causing the problems with the G harp. Where a note on the harp doesn’t fit, maybe you can bend a note to fit or just avoid that note.

If you look at the chord chart, though, the first chord is G, followed by C. Those chords are available on the C-harp, so maybe the C-harp is a better choice.

When you can’t completely match a key of harmonica to a scale or the notes of a chord progression, you have a few options. Ask these questions: