Developed by mechanical engineer Paul Bigsby in the late 1940s, the Bigsby Vibrato was the first widely available add-on guitar vibrato suitable to a number of different guitars. Early models were mounted like a trapeze tailpiece — anchored to the tail end of the guitar with wood screws — making them suitable for archtop acoustic-electric guitars. 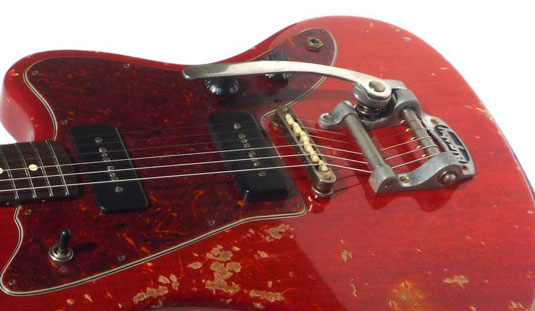 These are frequently seen on Gretsch guitars, and some Gibsons, Guilds, and others too. Later models were developed for mounting directly on the tops of solidbody electrics.

The Bigsby works by means of a roller bar to which the strings are anchored, which slackens the strings’ tension when you press down on the unit’s arm, producing a dip in their pitch. A single short, stiff spring mounted between a cup in the arm fixture and one in the unit’s base brings the roller bar back to position, and the strings back into tune (in theory, at least).

Bigsby vibratos have a fairly limited action, so you don’t get deep Van Halen–style dive-bombing out of them. They do, however, have a smooth, even feel that many players enjoy and are still one of the preferred vibratos for more retro playing styles.

And if you attack them with gusto, they can still get pretty wild, as heard in much of the more extreme playing of Neil Young on a Bigsby-equipped early ’50s Les Paul.

Because a Bigsby vibrato takes the place of a guitar’s tailpiece, you still need a bridge to go with it. Makers often partner the units with whatever proprietary independent bridge they tend to use — Gibson with its tune-o-matic, Gretsch with any of the company’s bridges, and so on — and Bigsby also makes a basic aluminum rocker bridge, a compensated one-piece saddle on a floating base, which is often used alongside these vibratos.