How to Use Sweep Picking and Raking on the Guitar

There are moments in guitar playing when you pick through a pattern of notes that features only one note per string and moves directly from string to string in neighboring fashion. You play this way in the example below, using part of an A‐minor arpeggio pattern in the 12th position. 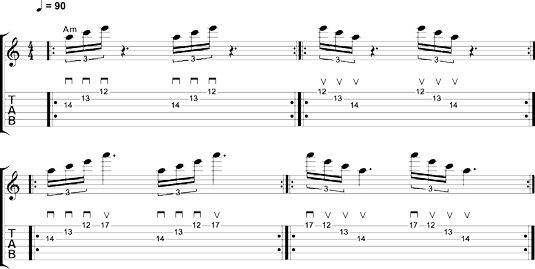 Sweep arpeggios in A minor.

Just to clarify, you don’t use three separate downstrokes to play the three notes, and you don’t strum the notes together like a chord; you use one long downstroke to sweep across all the three strings, and you fret and release each note one at a time. Start with the first sweep arpeggio in the first measure and repeat it until you get used to the technique; then work with it in reverse using an upstroke in measure two.

In measure three, you add one more note, a high A up at the 17th fret of the first string, which puts two notes on the first string. When ascending in this case, you need to come back with an upstroke and pick the first string again in order to play the last note. When played in reverse, this four‐note arpeggio is initially picked using a downstroke before you change pick directions to play the next note on the same string.

When you change directions, use the same upstroke to sweep through the second and third strings, completing the pattern. Sweep arpeggios are often played with two notes on the string where you begin and end. Watch these sweep arpeggios, and then practice all these variations on your own. You can adjust the tempo if necessary, but be careful not to slow it down so much that you lose the rolling effect of the sweep arpeggio.

In the next example, you move position to position, playing forms of Am and E, sweeping as you go. Instead of pausing at the top of the arpeggios, you pull off and immediately change directions. Practice at your own pace, repeating each position and arpeggio as needed. Sweep picking can be used in all styles of music, but it’s perhaps most associated with neoclassical metal and players like Yngwie Malmsteen. 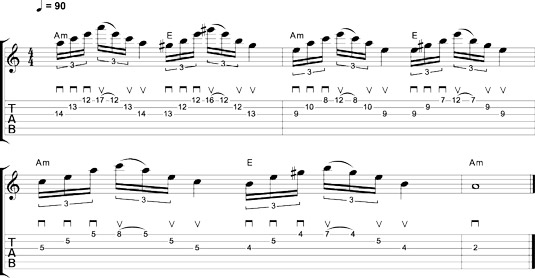 Sweep arpeggios using Am and E.

While sweep picking, you may become so focused on the sweeping action that you overlook other techniques. When playing examples like the one above, be sure that all the notes are fretted and plucked properly, including the notes that you pull off to. The phrases won’t sound good and won’t flow well if your pull‐offs are weak.

This is a good time to explain a rake. A rake is when you push or pull your pick over damped strings on your way to a target note. In the first measure, you brush the pick backward over strings one, two, and three on your way to the seventh fret of the fourth string. This is a signature lick of Stevie Ray Vaughan. You repeat the figuration three times before brushing the pick forward over all but the first string, which you fret and play at the 17th fret, and then slide off. Measure four is a signature lick of B.B. King.

Raking your way to ­target notes.