How to Use Economy Picking on the Guitar

When you combine alternate picking with sweep picking on the guitar, you get economy picking. This type of picking is so named because of its economy of movement. Alternate picking works well most of the time, but in some situations it’s more economical to reuse a stroke (usually the downstroke).

These licks are perfect examples of economy picking. Each measure includes a repeating figuration that consists of four sixteenth notes. Taking a look at the first measure, the figuration is based on a D‐minor triad. Notice that when you transition from the tenth fret of the second string to the tenth fret of the first string, you pick both notes with downstrokes, rather than alternate.

This is a type of sweep and, for most guitarists, is more economical than bypassing the first string so that you can come back at it with an upstroke. Using economy picking like this is especially crucial when playing at fast rates. You can create a sound reminiscent of “Sultans of Swing” by Dire Straits. 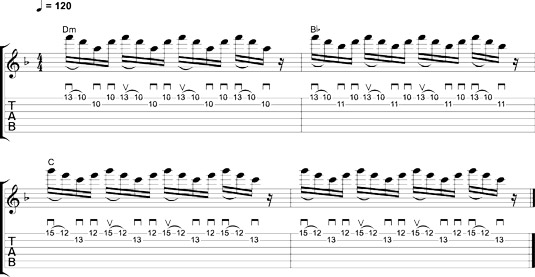 Next, you move to the key of E minor and play a few different motifs that are typically used in pentatonic‐based rock music. Pay attention to the pickstroke directions. Sometimes the need for economy picking isn’t apparent until you reach a certain speed. You can start slowly and then double the rate. 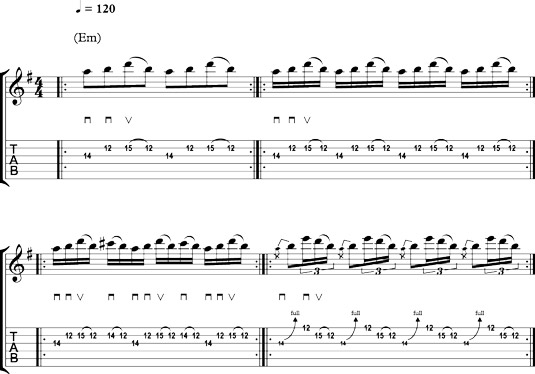 Next, you see how economy picking can come into play with three‐note‐per‐string scale patterns. Instead of continuously alternating, it’s more economical at fast tempos to reuse a downstroke as you change strings. The example is in the key of A major and features a whole pattern that begins in the fifth position.

Before you attempt to play through the whole thing, practice connecting each pair of strings using the economy technique. The same concept can be applied to any three‐note‐per‐string scale pattern, in any key, and in any position. 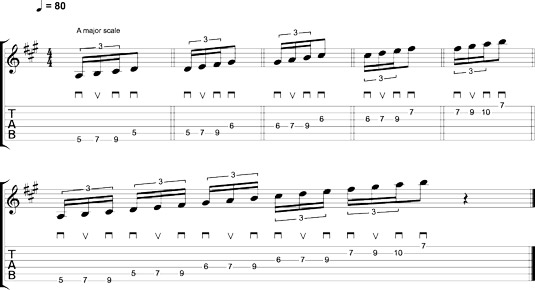