How to Tap the Pentatonic Scale on the Guitar

One technique you can use to vary your guitarmusic is by tapping. This example illustrates tapping with notes from pentatonic patterns 1 and 2 in A minor stretching between frets five and ten. Before you play it as written, consider how the same part could be played without tapping.

If you placed a capo at the fifth fret of your guitar, you could easily fret the notes above at the eighth and tenth frets with two fingers on your fretting hand, like your third and first fingers. By pulling off your third finger to your first finger and your first finger to the capoed string all in one continuous motion, you can complete and repeat the triplet pull-off figure.

A lick like this is fairly common in the open position, and Eddie Van Halen claims that it was his motivation to move these types of pull-offs around the fretboard without using a capo that led to him getting his right hand involved.

To play this example without a capo, you need to fret and hold the fifth fret with your first finger and do one of two things:

Here’s how this works in steps.

In tablature, a note that is tapped with the picking hand is marked with a T. When tapped notes are pulled off to other notes, ties are used just as with ordinary pull-offs. In the example above, you repeat the triplet figure four times, ending and sustaining on the tapped note at the tenth fret. Then you perform an identical figuration on the second string.

Tapping sounds best at fast speeds, which is why the example above is played at 160 BPM, but starting at that tempo is difficult. Cut the tempo in half and first work on it at 80 BPM.

You find that tapping can’t produce the same level of volume and the same amount of sustain that regular picking does. For this reason, tapping is aided by increased volume and added distortion, but this in turn creates the potential for more unwanted noise. As a result, the tapping technique requires you to keep idle strings quiet by using parts of both hands to dampen and mute.

No discussion of tapping would be complete without mentioning the track that started the whole craze, Van Halen’s instrumental guitar solo “Eruption.” The highlight of the solo is the rapidly tapped triads that have a classical-like structure. Here is an example played in a similar manner. 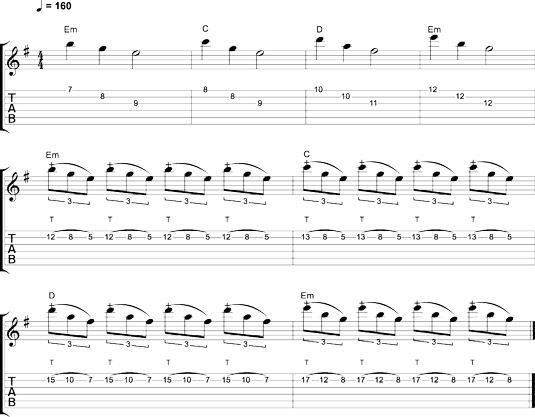 To help illustrate where the tapped notes come from, each triad is notated as an arpeggiated chord shape on strings one through three; then it’s followed with the same notes tapped in triplet figures along the second string. You see that this example is drawn from the E-minor scale using the chords Em, C, and D. It sounds best at 160 BPM, but you should cut the tempo in half as you work out the piece.

In the final tapping example, you use multiple fingers on both hands, and all notes are tapped; there are no pull-offs present. This style is called two-handed tapping. 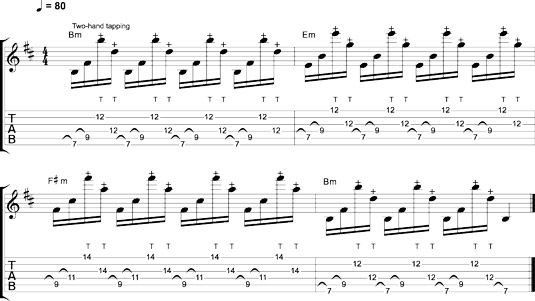 The use of two-handed tapping is very prone to causing unwanted noise, because the open strings ring when you lift your fingers up and your hands aren’t positioned in any way that can dampen the strings effectively.

For this reason, some players will slip an accessory like the FretWrap from Gruv Gear over the strings down near the nut and out of the way of their target notes. A cheap elastic-core hair tie or a piece of foam or fabric can work just as well to prevent the open strings from producing any noise.

Tapping doesn’t always need to be overdriven and aggressive. Joe Satriani’s “Midnight” is a great example of two-handed tapping and is played in the key of B minor using a clean tone.

You start out at just 80 BPM but can work your way up to faster tempos.