How to Play Travis Picking on Guitar

One of the most popular fingerstyle folk guitar techniques is known as Travis picking. By learning how to use the Travis picking technique on guitar, you can add interest when you play not only folk music, but everything from ragtime to the blues. Named after country guitarist Merle Travis, the Travis picking technique is achieved by alternating the thumb between two (and sometimes three) bass strings in steady quarter notes while the fingers pluck the higher strings, usually between the quarter notes (on the off-beats).

The result is a driving, rhythmic feel that you can use for a variety of settings from folk to the rolling 4/4 accompaniment pattern that you hear in Simon and Garfunkel’s “The Boxer” and Kansas’s “Dust in the Wind.”

For the basic Travis pattern, an easy way to remember which strings to hit and the order in which to hit them is to think of the four-note group of strings you pluck as a set of outside strings and a set of inside strings. On the D chord, for example, the 1st and 4th strings are “outside” and the 2nd and 3rd strings are “inside.”

Look at the following figure. Say the following phrase as you play: “Pinch, insides, outsides, thumb.” The following steps relate this phrase to the corresponding actions that you take:

You don’t normally use your ring finger when playing Travis patterns. 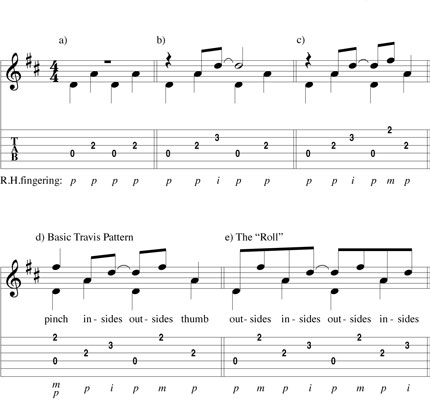 You can create other variations of the basic pattern by adding or omitting pinches and off-beats — but never omit the thumb notes. You can create these variations as you go, using them to break the monotony of one pattern that you otherwise repeat over and over.

Bill Evans is an internationally acclaimed five-string banjo player, teacher, historian, and recording artist, who has helped thousands of banjo players get the most out of their instruments. He's also performed throughout the world, and his CDs have topped both folk and bluegrass charts.