How to Play Ionian Mode on the Guitar

On the guitar, Ionian mode is the first mode of the major scale. It’s the sound that’s created when the 1st scale degree is functioning as the tonic. It’s better known as the plain major scale. In fact, musicians generally don’t use the name Ionian and don’t consider it a mode.

Ionian is the plain major scale. You can think of it as sounding like the “Do-Re-Mi” song. Backward, it sounds like “Joy to the World.”

Any time a piece of music uses the major scale and centers on the 1st degree or chord I, it’s Ionian mode. This doesn’t mean that other scale degrees and chords can’t be used; it just means that everything seems to revolve around the 1st degree and come back to it for resolution.

Using the G major scale as an example, G Ionian mode looks like this:

Here is how to view the fretboard in G Ionian mode. You see all the notes of G major with numbers indicating each scale degree, just for reference. You also see the seven chords of the major scale as both Roman numerals and actual letter names. 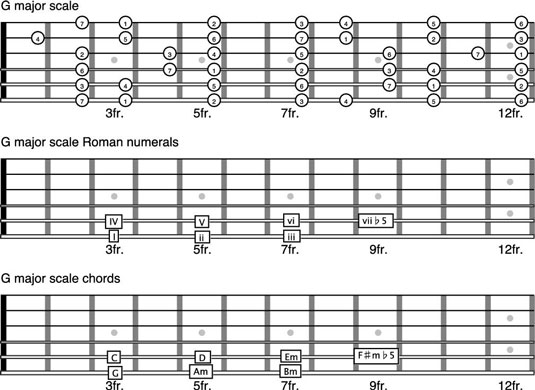 Whatever you do, it’ll always be G Ionian mode as long as you’re using notes and chords from the G major scale and the 1st degree, G, is functioning as the tonic.

You can play along with the G major scale notes to produce the sound of G Ionian mode in Chapter 13, Audio Track 14: G Ionian Play-Along Track. 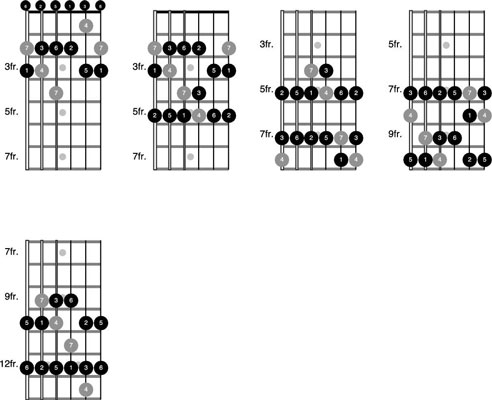 What’s nice about combining patterns this way is that you can stay in familiar pentatonic boxes and use standard pentatonic licks and phrases while at the same time incorporating major scale notes to produce the full major scale sound.

You don’t need to memorize and master every one of these combinations right now. You can work on it over time, perhaps focusing only on the patterns and positions that you prefer. As a starting place, you can play through pentatonic pattern 1, the go-to pattern of choice for most lead guitarists. Remember that patterns like this repeat at the 12th fret. Try pattern 1 in the 12th position.

The key of G major is just a starting point. You can produce Ionian mode in other keys by moving the scale to new positions and centering your playing on the 1st degree. For example, move up the patterns two frets and play in A Ionian, the A major scale. Move up two more frets for B Ionian, and so on.

“Stir it Up” by Bob Marley (A Ionian)

“The Lion Sleeps Tonight” by The Tokens (F Ionian)

“Twist and Shout” by The Beatles (D Ionian)

You can play along with any of these songs using the appropriate major scale patterns to produce the Ionian sound. You can also put together your own tracks by centering a progression around the 1st degree and chord from the major scale.

Here is a demonstration on how to play in Ionian mode in Chapter 13, Video Track 32.