How to Play Harp Harmonics on the Guitar

Here, you play parts that combine artificial harmonics with regularly plucked guitar strings. You get introduced to the full concept of harp harmonics by plucking everything with your picking hand alone. You use this newfound technique to play through scales, arpeggiate chords, and create cascading effects.

Notice that all the notes in the example below at the 12th fret are harmonics, and all the open strings are played in a normal fashion. The goal here is to play everything using only your picking hand.

In the first two measures below, you ascend and descend the notes in a scalelike fashion. First, focus on getting the feel for one direction at a time; then work at putting both directions together in a continuous cycle. In the second line, you see a popular pattern that often accompanies this harp-style technique, which is a pattern that reuses the first string as harmonics are continued through to the third and second strings.

In these measures, the notes do not maintain a sequential pattern of scale steps. Instead, you skip through the scale tones using the high E string as a temporary pedal point.

Because this example features notes related to the E-minor/G-major pentatonic scale, it produces both an E-minor and G-major tonality and can be used along with both scales. In fact, this example sounds as much like a chord as it does a scale, because of the way the notes all sustain and ring together.

Playing harp harmonics in the 12th position is only the beginning. You can raise the open strings by barring with your fretting hand and then create harp sounds for other scales and chords.

In addition to the last suggestion to barre at different frets, you can also hold down full chord shapes with your fretting hand and trace them harp-style. In other words, after plucking a harmonic for each note in a chord shape, follow it with a finger on another string. Most guitarists do this with their plucking thumbs and picking fingers two or three strings apart and alternate thumb, finger, thumb, finger, and so on, with the thumb always plucking a harmonic and the finger plucking a string normally.

When alternating your thumb and finger while plucking harp harmonics, you can create variation by playing patterns that are either two or three strings apart, and by starting with either the harmonic or the regularly plucked string. Additionally, you can play the strings in pairs, simultaneously plucking a harmonic with its alternate string. Try it!

One of the problems with playing harp harmonics on plain major and minor chords is that you produce too many unison pitches. One of the distinct features of a real harp instrument is the ability the player has to strike and sustain neighboring pitches, like a root and second or a seventh and root. For this reason, harp-style guitarists like to use chord types with added chord tones and extensions.

When you follow the D9 harp pattern in the tab, it’s as though you play a scale using the degrees ♭ó7–1–2–3–5♭ó7. Notice the whole tones. Harping the Gmaj7(add4) produces semitones with the degrees 7–1–3–4–5–7–1–3. You wouldn’t normally be able to play and sustain chord voicings like this.

The harp pattern starts with the regularly plucked string. The notes indicated to be artificial harmonics (A.H.) are grazed and plucked 12 frets higher. 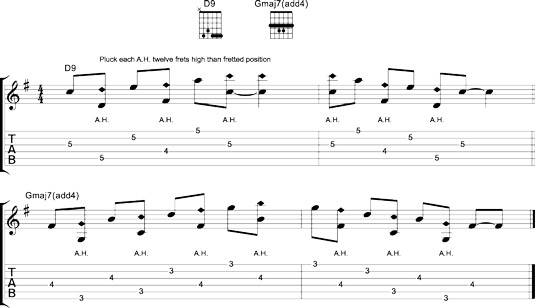 In some scores, harp harmonics are indicated using H.H.

Below, you take it to the next level by incorporating pull-offs, hammer-ons, full scales, and triplet figurations. You begin by focusing on the first measure and following these steps:

In measure two, you change directions and ascend the C scale. In measure three, you descend again, but this time only using six degrees of the C scale and a repeating triplet figuration.