How to Play Chord Melody Style on the Guitar

When a guitarist arranges a song’s main melody and chords together to form one part, it’s called playing — big surprise — chord melody. For this example, you play a version of the popular Christmas carol, “What Child Is This?,” which is an adaptation of an earlier folksong, “Greensleeves.”

Before you try to play the arrangement below as written, take a moment to familiarize yourself with the melody. The melody is voice 1 in the score and features note stems that go up. Watch the demonstration of this chord melody style, pay attention to the 3/4 waltz time, and then work out the melody on your own, ignoring for now voice 2 in the score, which features note stems going down. When you’re familiar with the main melody, you’re ready to add in the other elements of the arrangement.

The example has two sections, A and B, and each one is played in two different manners. Here’s a list of what each section includes:

Work on only one approach from this list at a time. When you get a technique down, apply it through the entire tune. In other words, the whole piece can be played using root notes from each chord as they change, as described in the first step. 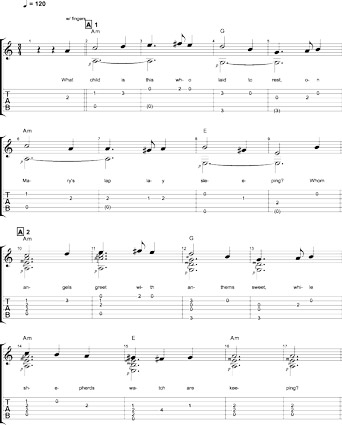 Playing chord melody on “What Child Is This?”

Likewise the whole piece can be played piano‐style, or with forward rolls, or with arpeggiation. When you’re really good, you use a mixture of all four styles and pick and choose how to approach each chord as you play. 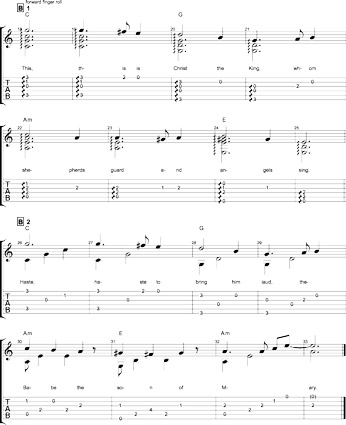 Continue playing chord melody on “What Child Is This?”

You can adapt a tune for chord melody by putting the lead line in the upper voicing
of the chords. 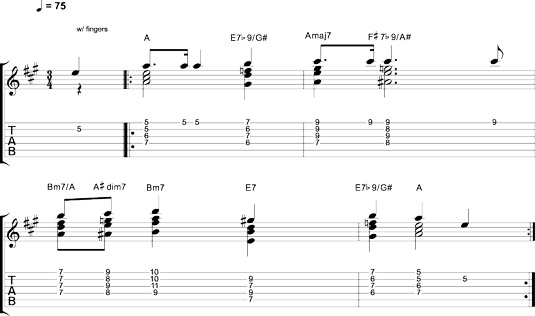 Playing chord melody in the style of Vince Guaraldi.