How to Finger Open Chords on the Guitar

To begin, take a look at a few open-position chords and explore some alternate fingerings for the guitar that you may not have thought of, or perhaps thought were incorrect.

You don’t need to master and use all the fingerings you find here. Instead, the goal here is simply to explore your options so that you get to know your own hands better and find what works well for you. You’ll progress as a guitarist and refine your skills by playing to your strengths and avoiding your weaknesses.

Next, you try a handful of A-chord options. Basically, your options include some combination of three fingers, or barring with one finger, usually the first. Again, there’s no right or wrong way to do things here, as long as you cleanly sound the chord.

When you play a chord like A, wrap your thumb around the back of the guitar neck and graze the sixth string to dampen it so that you clearly hear the open fifth string, A, in the bass position of the chord when strumming.

Next, you see some of your options when playing a D chord in the open position. The first diagram is how a D is usually taught and most often played, but perhaps one of the other versions works better for you. James Taylor favors the example in the second diagram, which you see him use in the “Fire and Rain” guitar lesson on his official YouTube page.

The last chord you look at in the open position is G. Below, you see five examples, with the first two being fingerings typically used to initially teach the G chord in beginner guitar lessons. The third diagram is very common and simply swaps the third, B, on the open second string with the fifth, D, at the third fret. If you also remove the B at the second fret of the fifth string, then the chord is all roots and fifths a la a “power chord,” a popular voicing favored by rock guitarists.

Although only a few types of open-position chords are covered here, you can apply the same ideas to other types of chords that you play near the end of the neck, always thinking outside the box and using fingerings that best help you accomplish what you’re trying to play. 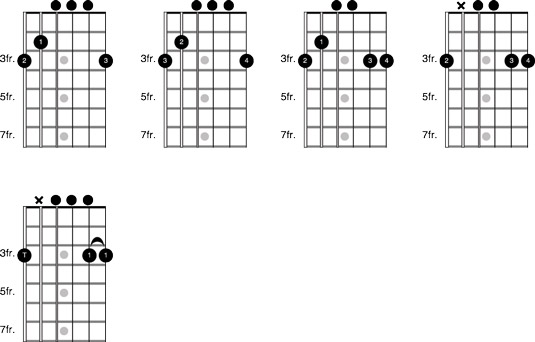