How to Do a Trem Bar Dive on the Guitar

Apart from adding vibrato, trem bars are used to lower the pitch of notes on the guitar. This movement is called a dive and can be shallow or deep, depending on whether a player wants to be subtle or dramatic. When you hear a trem‐bar dive return a note to its original pitch, it’s called a dive and return. Sometimes players dive on one note and return on another.

In the example below you use the open sixth string, E, to play common trem‐bar dive variations. Notice that the notation instructs you to play these parts “w/ trem. bar.” The downward‐ and upward‐leaning lines above the tab represent the down‐and‐up motion of your trem bar.

The number by these lines indicates how far the pitch should drop — in this case, a fifth, but that’s only an approximation for these examples, and you don’t need to worry about diving to a specific pitch right now.

Here’s how all four measures break down:

These techniques can be played on any note, whether the note is an open string or a fretted note. Try playing through the example above, applying each variation to the fifth string, fourth string, and so on. Try fretting a note and playing dives and dive returns. From a fretted note, you can hammer on to another note with another finger before a return.

In the following example, you work with the same dive‐and‐return techniques from the last example, but using harmonics. You focus on the natural harmonic at the fifth fret of the third string. In order to get maximum sustain and volume out of harmonics like this, you need to play loud and with a lot of distortion, so be sure to turn up your amp’s drive and overall level.

You dive approximately a fifth down, but again it’s not necessary to focus on that degree of change specifically with these examples. In fact, you can experiment with how far you dive and even how far you return.

These examples return to the original pitches, but you can pull up on the bar to return the pitch to a note higher than the original, depending on your tremolo system’s range of movement. In measure three, you first strike the string open and then graze a harmonic before diving. In measure four, you dive the open string and return with a harmonic.

When diving and returning, some players initially set a string into motion by flicking it with a finger on their fretting hands instead of picking it in a normal fashion. This leaves the picking hand free to operate the bar. You can also swing the trem bar around so that it points away from the strings and then pull up on it to dive down.

Pantera guitarist Dimebag Darrell used these techniques along with gobs of distortion and loads of level to perform his trademark harmonic squeals, which were simply open‐string dives and harmonic returns.

There are many ways in which guitarists dive and return notes and harmonics using a trem bar. You can pick up on ideas by listening to others. A few good places to start are Stevie Ray Vaughan’s “Little Wing,” Van Halen’s “Eruption,” and Jimi Hendrix’s “The Star‐Spangled Banner.” For more subtle usage, listen to Chris Isaak’s “Wicked Game” and Heart’s “Barracuda.” Alex Lifeson’s guitar solo in Rush’s “Limelight” is an excellent example of how to use trem‐bar vibrato, dives, and returns using open strings, harmonics, and fretted notes.

Following is an example of diving and returning on a chord. When the A‐minor chord is raked backward using a clean tone with reverb, the dive and return is very reminiscent of surf music from the 1960s — specifically, “Bombora” by The Surfaris and songs from The Ventures and The Shadows. Though not considered surf music, “Hanky Panky” by Tommy James and the Shondells is another good example of diving and retuning on a chord. 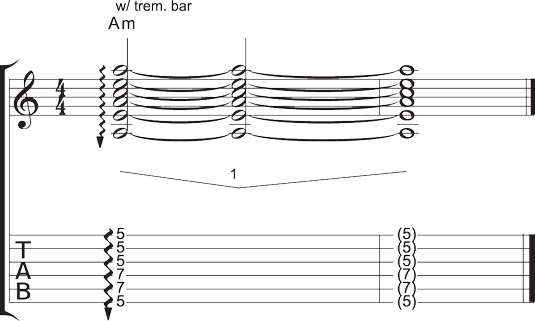 Diving and returning on a chord.