Crosspicking on the Guitar

One technique related to how guitarists alternate pick is called crosspicking. No, it doesn’t involve crossing your fingers. With this technique, guitarists use a pick to repeatedly cross over a group of strings, mimicking the finger rolls used by banjo players.

Crosspicking typically involves three strings and sixteenth notes played in syncopated figures of three as you see below using parts of an open‐position C chord. Instead of consisting of strict alternate picking, crosspicking draws from the economy technique, as you see from the pickstrokes printed above the tab line.

Guitarists often make use of an open string when using crosspicking, again mimicking the style of the banjo. In the next example, you see how you can start with an open‐C chord shape and move up through a whole scale using sixth intervals while pedaling an open G. 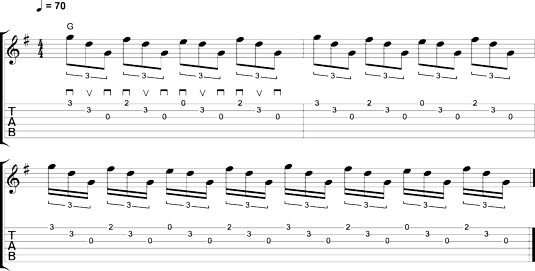 Crosspicking doesn’t always need to have a bluegrass flavor to it. Queensrÿche’s “Silent Lucidity” is a good example of the technique used in the rock genre.