You’ll double the number of chords you can use in vamping by adding D‐shape chords to your bluegrass banjo fretboard toolkit. Here’s your guide to using both the F and D shapes to make you sound like a vamping pro!

Moving between F and D shapes

Most banjo players will enhance the sound of the basic vamping pattern by moving back and forth from the F shape to the D shape for the same chord. To reposition your fretting‐hand fingers as you move to the D shape from the F shape, keep your ring finger and pinky finger right where they are on the fourth and first strings, trying your best not to lift up the ring finger as you shift. Next, trade the position of your index finger and middle finger, moving each to the other string. 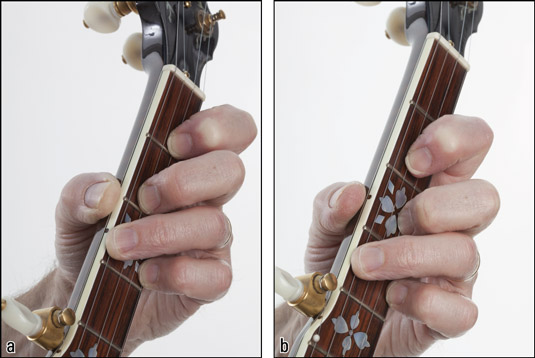 The location of the D‐shape chord is always four frets higher than the F‐shape chord for the same letter name chord. When you become accustomed to shifting positions in this way, you’ll want to frequently use both shapes for all kinds of chords in vamping. 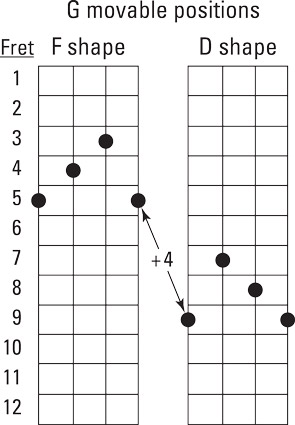 Now try playing this exercise, where you practice alternating F and D shapes first in one measure and then in half‐measure groupings for the I, IV, and V chords in the key of G. When you can shift confidently between these shapes for different major chords, you’re using the techniques that the best banjo players typically employ for vamping. 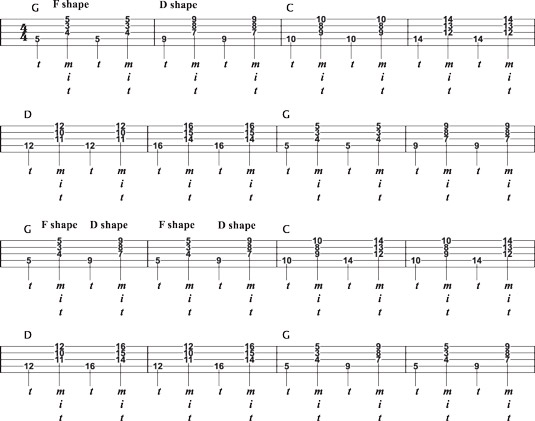 Vamping using F and D shapes for I, IV, and V chords in the key of G.

Using both D and F shapes gives you more options in choosing tasty chord transitions for both backup and lead playing. A frequently used shift that comes in handy for almost any song involves moving from a D‐position chord to an F‐position chord that’s one fret higher.

In the key of G, this position shift can be used in two different ways:

This shows where these shifts occur on the banjo fingerboard. 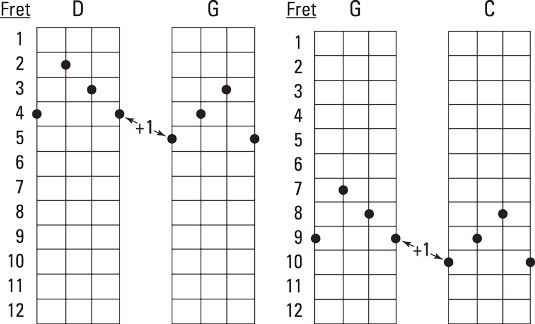 Try putting these transitions to use by playing the chord progression to the bluegrass standard “Nine Pound Hammer.”

Keeping the fretting‐hand fingers in position as you shift between the F‐ and D‐shape positions is tricky. The ring finger is the usual culprit because it often wants to lift off of the fourth string entirely and follow the middle finger when it moves from the third to the second string when changing chord shapes.

Practice moving back and forth between the two positions, being careful to train the ring finger to stay in contact with the fourth string as you move your index finger and middle finger to fret the next position. Next, try keeping both the ring finger and pinky finger lightly touching the fourth and first strings as you move up and down the neck to fret different chords. This skill takes a bit of time, so exercise patience as you vamp!

It’s time to have some fun with the classic tune “Salty Dog Blues.” “Salty Dog” has an unusual chord progression of G–E–A–D–G that is ideal for using different movable shapes in vamping. Choosing the fretted positions that are mapped out below keeps your hand in a more limited region of the fingerboard, allowing you to fret chords more accurately. It also sounds great to move between chords in this way!