How to Survey the Neck to Identify a Great Bluegrass Banjo

If you want a great bluegrass banjo, you need to survey the neck before making your purchase. The neck is the long piece of wood that attaches to the banjo body that guides the strings along the instrument’s fretting surface (called the fingerboard). The neck holds the strings secure using tuners, four of which are located at the peghead, with the fifth string tuning peg located almost halfway up the neck. 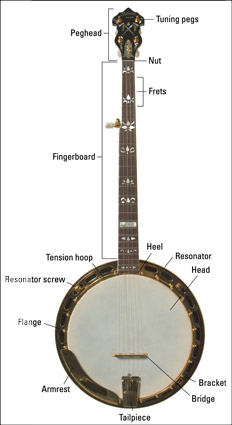 Credit: Photograph courtesy of Gruhn Guitars
Naming the parts of a banjo.

Bluegrass banjo necks are most commonly made of maple, mahogany, or walnut. The type of wood used for the neck usually matches the wood that’s used for the surface of the resonator (the bowl‐shaped piece of wood that’s attached to the back of the banjo).

Banjo players and builders love to endlessly discuss the relative merits of each kind of wood. For an entry‐level instrument, the type of wood used for the neck isn’t as important as the banjo’s general playability. However, with professional banjos, the type of wood can be an important distinguishing characteristic.

Generally speaking, a mahogany neck tends to gives a banjo a warmer sound, a maple neck is clearer and more bell-like, and a walnut neck lends the deepest tone.

Keep in mind that tone is the result of all the parts working together, and the neck is just one factor. The higher the quality of a banjo, the more the various parts are made to work together to create a great‐sounding instrument.

The fingerboard is the piece of wood that’s glued to the neck that holds the frets. Frets are the metal bars that are positioned horizontally to the direction of the strings at predetermined intervals along the fingerboard. When you place a finger behind a fret, you’re shortening the string length and raising the pitch of the string. The great majority of bluegrass banjos have 22 frets, although lately some leading players are sporting fingerboard extensions, which add two higher frets — and two higher notes — to the total fingerboard length.

The pressure of a fretted string will very gradually wear down a fret after years of steady use. If you hear buzzing from the fretted notes on an older instrument, look to your frets as a potential source of the problem. A banjo repairperson can dress the frets by leveling out the fret surfaces, allowing a few more years of use before they have to be replaced. 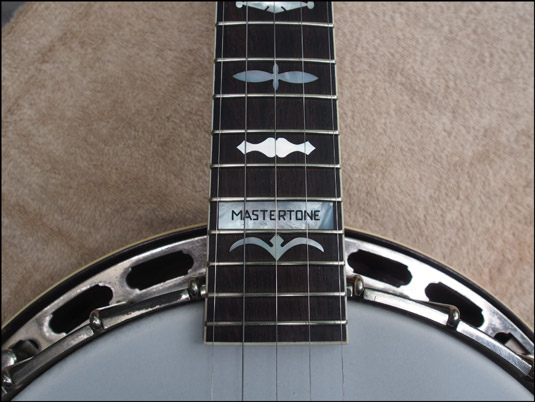 Tuners are the geared pegs that catch the strings at the neck end of the banjo and hold the strings in tune. The quality of the tuner usually correlates with the price of the banjo, but luckily, most all banjos have tuners that do the job well. Tuners do occasionally fail, but they’re usually easy to replace with just a wrench.

A geared fifth‐string peg makes tuning a lot easier and is worth swapping out for if you have an entry‐level banjo without one. 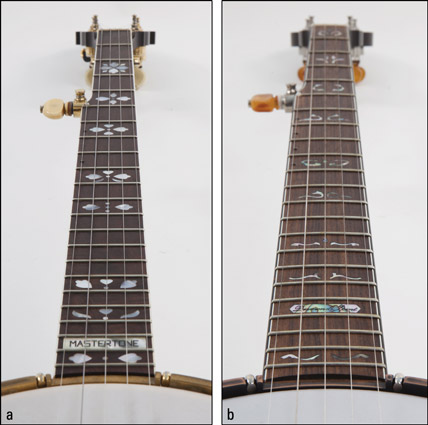 Credit: Photographs by Anne Hamersky
Comparing fingerboards: (a) flat and (b) radiused.

Keith D‐tuners are deluxe tuners that allow you to control the up‐and‐down movement of the pegs to move precisely from one pitch to another. If you’re in love with Earl Scruggs’s “tuner” tunes like “Flint Hill Special” and “Randy Lynn Rag,” Keith pegs should move to the top of your wish list. Banjo players most often install Keith pegs on the second and third strings.

The nut is the white slotted piece of plastic, ivory, or bone that keeps the strings in place at the peghead end of the fretboard and directs the strings to the tuning pegs. Like frets, the string notches in the nut can wear down over time, leading to buzzing on the open strings. Nuts can be reslotted or replaced by a qualified repairperson.

When steel strings came into wider use in the early 20th century, instrument builders needed to find ways to strengthen necks to withstand the greater pressure exerted by these new strings. The truss rod consists of one or two adjustable metal rods that run underneath the fingerboard, starting at the peghead and extending to the 14th fret; it maintains the neck at a consistent angle under the pressure of the strings. The truss rod is usually adjusted with a nut driver or Allen wrench at the peghead end.

A plastic or pearl truss rod cover on the peghead is the giveaway that your instrument has a truss rod.