Playing up‐the‐neck scales over more than one octave in melodic style can require some fretting prestidigitation on the bluegrass banjo. You’ll use all four fretting fingers and even your thumb to perform some amazing sleight of hand in the upper reaches of your banjo neck as you work through the following examples. All the hard work you’re about to do will pay off as you open up vast new fretboard regions for future high‐flying melodic explorations.

Playing an extended G scale using the thumb to fret the fifth string.

Not so easy, right? Remember that melodic banjo technique requires you to use a different picking finger to play a different string with each successive note. At some point, you simply have to fret the fifth string to grab a note you need in these upper fretting regions. The good news is that you don’t have to use the thumb to do this. As an alternative, you can use one of your four fingers, but this requires you to alter other fretting fingers.

Players just naturally get accustomed to one way or the other of fretting these positions, depending upon what they’re more easily able to reach and which position feels the most natural. If you have larger hands, you may prefer fretting the fifth string with your thumb. If you have smaller hands, you’ll likely want to use your middle finger. 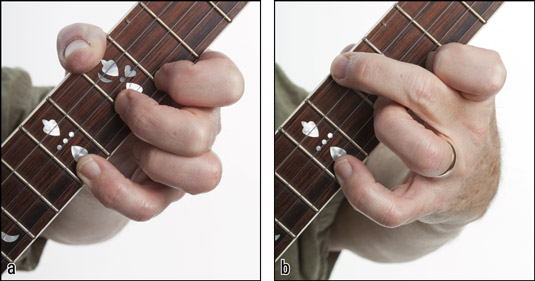 Credit: Photographs by Anne Hamersky
Fretting upper melodic‐style positions with (a) the thumb and (b) the middle finger.

There are many possible fretting pathways you can create to play the notes of the G‐major scale all up and down your banjo neck. As you move into these up‐the‐neck regions, you’ll often have to perform sudden fretting‐hand shifts as well as fret the fifth string to reach the consecutive notes of a scale.

Check out the example below, which covers two entire octaves of the G‐major scale to see how this works. 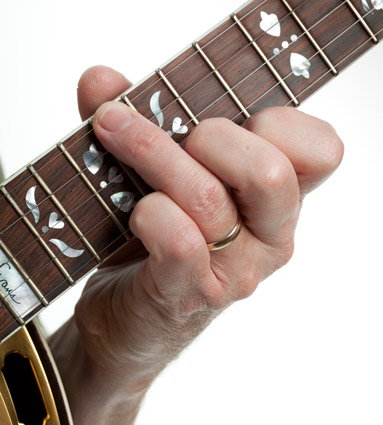 Check out this cool melodic lick that uses many of the up‐the‐neck positions.

Melodic style also allows you to play long extended passages of cascading notes that can be assembled into great‐sounding licks. The six‐measure G lick starts high up on your banjo neck with a fretted position where you’ll need to call on your pinky and ring fingers to fret the first and second strings at the 12th fret and your thumb to fret the fifth string at the 10th fret. Fortunately, it’s all musically downhill from there.

A cascading melodic lick in G.

If you’re familiar with the fretted positions for the G‐major scales, conquering challenging licks like this will be a breeze. As your piano teacher told you many years ago, practice those scales, kid!