How to Play Forward Rolls on the Bluegrass Banjo

Forward rolls put the drive and power into the sound of bluegrass banjo. You simply can’t have cornfield cred without knowing your forward rolls backward and, yes, forward. Forward rolls come in several varieties, with different sequences of picking‐hand fingers. However, at some point in every eight‐note forward roll, you pick two thumb–index–middle sequences that provide the propulsion needed for forward roll liftoff.

Let’s get started by trying out a couple of straightforward examples that emphasize the T–I–M‐ness that’s at the heart of the forward roll:

Forward rolls are fantastic choices to use to accompany songs because they create rhythmic drive. Try forward rolls 3 and 4 for “Will the Circle Be Unbroken,” moving from roll 3 for the G and D7 chords to roll 4 for the C chord. 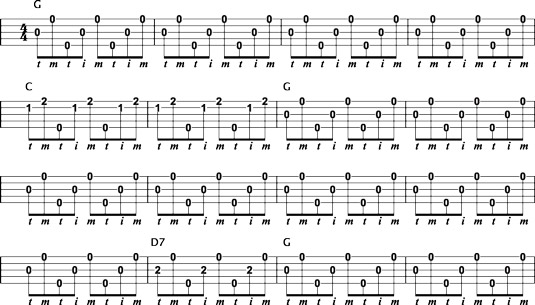 Forward rolls with “Will the Circle Be Unbroken.”

It’s a great idea to begin your forward rolls with the picking‐hand thumb whenever possible. The act of using the thumb, instead of the index finger, for the first beat of a measure will help you to feel the downbeat of each new measure more powerfully.

Because chord changes commonly occur on downbeats, you’re also helping yourself remember the chord progression when moving your thumb to play that first note of a new chord. Putting the thumb to it, as they say down in North Carolina, is one of Earl Scruggs’s most important innovations, which is reason enough to try it!