How to Play Fiddle-Tune Backup on the Bluegrass Banjo

Some of the most satisfying music that you can make on the bluegrass banjo is when you back up a fiddle. As part of every Flatt & Scruggs live show, fiddle and banjo aficionados would anxiously wait for that moment in the concert when the Foggy Mountain Boys would leave the stage, allowing Earl and his fiddler to play one or two of the old fiddle tunes just by themselves.

Earl Scruggs perfected the banjo’s role in the fiddle and banjo duet through his work in the 1950s and 1960s with the fiddlers who played in his band: Benny Martin, Jim Shumate, Paul Warren, and Chubby Wise.

When you play with a fiddler, you’re sustaining one of the oldest and most important traditions in American folk music. You want to make sure that your banjo playing is holding up its end of the deal! Great fiddle‐tune backup calls upon the banjo to not only play forward roll patterns, but also utilize a variety of other techniques to create an active and rhythmic counterpoint to the fiddler’s melody.

Here, you discover backup techniques that you can use to accompany the fiddle in the keys of G and D. You also get acquainted with two of the best‐known fiddle classics in bluegrass music, “Sally Goodin’” and “Whiskey Before Breakfast.”

“Sally Goodin’,” “Katy Hill,” “Leather Britches,” and “Grey Eagle” are just a few of the fiddle tunes that can be accompanied on the banjo using similar backup roll‐pattern techniques. All these tunes share a similar chord progression that’s very easy to remember: three measures of G, followed by a half‐measure of D, then back again to a half‐measure of G.

Following Earl’s lead, banjo players have adopted a consistent set of backup techniques to accompany these kinds of fiddle tunes. For the four‐measure chord progression that these tunes all share, try playing a two‐measure forward‐roll G pattern, followed by a one‐measure G lick and then concluding with another one‐measure lick that moves from the D chord back home to the G.

Check out the example below for phrases and licks that you can use to accompany a fiddler through four repetitions of “Sally Goodin’.” 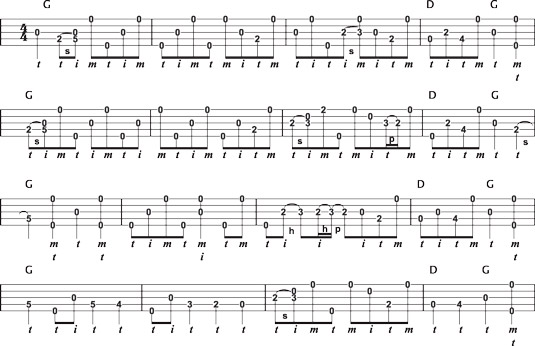 Fiddle‐tune backup in the key of G for “Sally Goodin’.”

Fiddlers love to play in the key of D, and because banjo players just love to play with fiddlers, we’ve developed some great‐sounding techniques to keep up in this key.

Much of what you can play to accompany fiddle tunes in the key of D you can borrow from the techniques you’re already familiar with from playing tunes in the key of G. For instance, two‐measure forward‐roll backup patterns will also sound great in the key of D, but you’ll need to shift strings a bit to emphasize the fretted notes of the D‐major chord.

In addition, many D fiddle tunes have fast‐moving chord progressions where chords change every measure and sometimes even every half‐measure. Never fear! You’ll find that the forward‐reverse roll is designed just for these situations. It’s time to seize the day in the key of D by trying out some accompaniment techniques for another fiddle‐tune favorite, “Whiskey Before Breakfast.”

Besides having a fantastic song title, “Whiskey Before Breakfast” is also one of the most frequently played jam‐session instrumentals. Although “Whiskey” seems to be relatively easy to play on the fiddle, mandolin, and guitar, it’s one of those tunes that strikes fear into even experienced banjo players.

Maybe it’s the wide‐ranging, challenging melody line (which is hard to remember and even harder to play!), or it could be the fast‐moving chord progression, or maybe it’s just playing in the key of D that makes some banjo players want to crawl back into our banjo caves and just stick to playing “Cripple Creek” and “Foggy Mountain Breakdown.” Whatever your excuse, it’s time to shed your inhibitions and experience a bit of attitude adjustment in the key of D by trying out this backup to “Whiskey Before Breakfast.”

You’ll want to raise your fifth string to A to play in the key of D without a capo for this version of “Whiskey Before Breakfast.” Use forward‐roll backup when a chord lasts for more than one measure, but don’t be afraid to shift into using forward‐reverse rolls for the many times in this tune where the chords change every measure or every half‐measure. You’ll have a blast playing the last line of the song, where you’ll move from the 12th fret all the way down to the first position, using forward‐reverse rolls to negotiate one of the fastest‐moving chord progressions in bluegrass music. Enjoy!

In a jam session, it’s not essential that you take a solo on every song — especially on fiddle tunes. What’s more important in this situation is being able to quickly pick up chord progressions by watching the other musicians (particularly the guitar player) and asking questions when you get stuck. When you’ve learned the chords, you’ll want to try working up a good-sounding and comfortable‐to‐play roll‐pattern backup. After you’ve mastered the backup, you can worry about creating a solo. 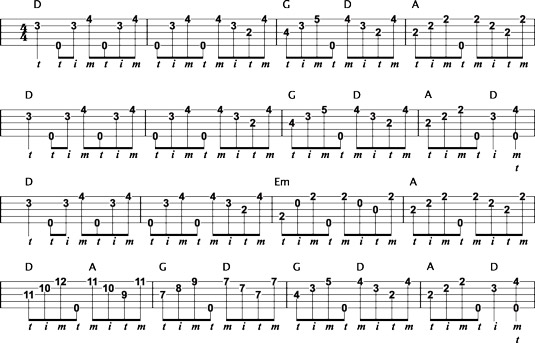 “Whiskey Before Breakfast” backup in the key of D, fifth string tuned to A.