The fretting hand has a lot of work to do in single‐string banjo playing! Like melodic banjo, single‐string style is based around assembling the notes of a scale into licks and melodies.

Using the forward roll in 6/8 time in single‐string banjo.

However, with single‐string playing, you often fret consecutive scale notes on the same string, something that’s not usually done in melodic banjo playing.

Boxes and open and closed positions

Fretting in single‐string banjo requires an alternative way of finding the notes you need and even a different way of conceptualizing the banjo fingerboard. In single‐string style, players work out scale patterns up and down the neck of their banjos, using shifting positions that guitarists sometimes call boxes. A box is a three‐ to five‐fret region where you find the fretted notes you need by moving horizontally across the fingerboard from one string to the next. Boxes are often but not always related to up‐the‐neck chord positions.

Banjo players play single‐string phrases in open position, where you mix unfretted and fretted strings, usually in the lower five frets of the banjo, and in closed position, where every note of a phrase is played using fretted notes. Closed positions are typically used above the fifth fret and can be transposed to new keys by shifting any pattern up or down the fingerboard.

Big stretches are sometimes required in single‐string fretting, and many players will use a slightly different hand position than they use for roll‐based and melodic playing. The larger the stretch, the more you may need to move your fretting‐hand thumb to the middle of the back side of your banjo neck, providing your fingers with greater reach over the fingerboard.

You’ll need for your fingers to be ready to spring into action at all times, so try to keep them as close to the strings as possible with fingertips aimed in the direction of the banjo fingerboard.

The key to becoming a great single‐string player is to know your open‐ and closed‐position scales, in as many areas of the fretboard as possible and in the keys you need. 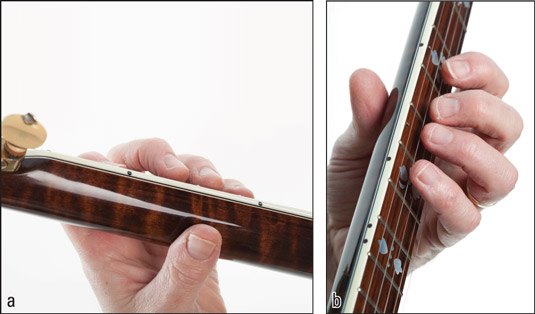 Credit: Photographs by Anne Hamersky
(a) Placing the thumb on the back of the neck and (b) moving your fingers close to the strings for an optimal fretting‐hand position for single‐string stretches.

Working out open and closed‐position scales

It’s time to put the fretting hand to work to make some music in single‐string style. You’ll understand a lot more clearly the differences between open‐ and closed‐position fretting by working out both approaches for the G‐ and D‐major scales, two of the most common keys you’ll use for playing songs.

To get things started, play this example, which presents a G‐major scale in open position, moving down through the fourth‐string notes that are in this scale below the third‐string open G.

Now compare with the examples below, where you play the exact same note sequence, but this time using all fretted notes.

In this example, you fret the pinky finger on the fifth fret of the fourth string to play the G‐major scale.

This starting point defines the box you’re using as extending from the second to the fifth fret of your banjo fingerboard and largely determines the other fingers you use to fret the rest of the scale.

If you start this same G scale using a different finger, you play the same notes but use a different box, or fretted region. Each box extends the range of the scale in a different way.

These examples show the fingerings for the G‐major scale that result if you use the middle finger and then the index finger as your starting points.

Playing a G‐major scale starting on the middle finger.

Playing a G‐major scale starting on the index finger.

You can discover all the different ways the same major scale can be played up and down the length of your fingerboard by starting a new scale on each succeeding, ascending note of the scale. When playing a scale in this way, you’re playing through the different modes of Western music and exploring all the possible box positions for a major scale.

You may not ever play a fiddle tune in the Lydian or Locrian mode, and it’s certainly not necessary to remember the modes’ names to play great music. Working through this last round of banjo exercises should open your ears while stretching your fingers, leading to new ideas and positions in the most friendly banjo key of G major.