The program booklet you receive at a classical music concert is critical to enjoying the experience. You can expect to see all the following elements in any self-respecting program book:

For reasons that are almost unfathomable, the vast majority of symphony orchestras use one constant, tried-and-true format for 90 percent of their concerts. This format is so common that it’s almost expected by a large segment of the concert-going population:

This listing means that there are three pieces on the program, with a pause after the first two. You may compare this format to that of eating a meal— appetizer, entree, and dessert — except that the dessert is nearly twice as big as the entree and takes 45 minutes to eat. But otherwise, it’s exactly the same.

An overture is a short musical introduction or prelude meant to whet your musical appetite. It’s usually an actual overture stolen from some long-ago musical or opera. It’s a great way to start the concert; a short opening piece is a neat way to give the latecomers a chance to enter without missing too much.

A concerto (pronounced “con-CHAIR-toe”) is a piece of music in which one featured player (the soloist) plays the melody while the rest of the orchestra accompanies her. The concerto is by far the flashiest part of any concert program, and many people go to a symphony orchestra concert just to experience an exciting soloist.

After intermission comes the symphony. This piece is the longest work on the program. It’s almost always four movements long; most symphonies last 35 to 45 minutes, just the right length for one half of the concert. 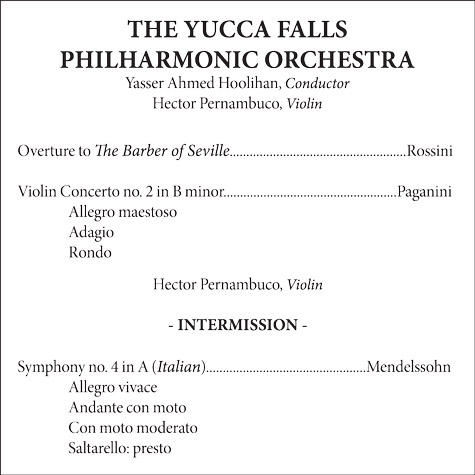 The name of the orchestra always appears at the top of the program page. This imaginary band, the Yucca Falls Philharmonic Orchestra, has chosen one of the very few names available to it in the orchestra world. Most orchestras are named for their city — usually followed by the completely interchangeable words Symphony, Symphony Orchestra, Philharmonic Orchestra, or simply Orchestra. Nearly all professional orchestras in the country name themselves this way, for two reasons:

Following the orchestra’s name is the name of the music director or conductor and whatever soloist is on the program for the evening. In this case, violinist Hector Pernambuco is probably not a native of Yucca Falls but a virtuoso brought in by the management to offer some spice to the symphony season.

The first work on the program is the Overture to The Barber of Seville by Rossini. The program page doesn’t tell you anything about Rossini — not even his first name. But if you turn the page, the program book will include a description of each piece of music as well as a short biography of each composer.

In this case, Rossini refers to Gioachino Rossini (1792–1868), an Italian composer of operas. Nobody performs his operas anymore (with the prominent exceptions of The Barber of Seville and Cinderella), but the overtures to those operas are still very well known and well loved today. This overture will be quite short; indeed, it’s about seven minutes long. You may also guess from the title that the work is lighthearted, and it is.

The concerto that follows is by Paganini. The biography will tell you that this is none other than Niccolò Paganini (1782–1840), that great Italian master of the violin who wrote many pyrotechnical showpieces to demonstrate his virtuosity.

Notice that the concerto has the usual three movements. They’re FAST-SLOW-FAST, but the three lines of Italian writing below the name of the piece give more specific clues. Most composers write some words on the sheet music at the beginning of each movement, describing the speed and character of the music to come.

Allegro maestoso means lively and majestic. Adagio means restful, at ease. Rondo refers to a particular musical form where a main theme comes back again and again — usually at a brisk pace.

After intermission comes the symphony. The title of 99 percent of all symphonies is simply “Symphony,” followed by a number and sometimes a key. This one is number 4, and it’s in the key of A. This symphony, unlike most, also has a nickname in its title: Italian. From this addition, you can bet that the music somehow tries to depict the flavor of Italy.

The symphony is by Mendelssohn, and the program book will eventually tell you that this composer is Felix Mendelssohn (1809–1847), a talented German composer who was long on talent and short on lifespan. (He died at age 38.)

If you take a moment while reading the program, you’ll notice that the clever folks of the Yucca Falls Philharmonic have had a little brainstorm. All the pieces on the program have some connection with Italy. The first two are written by Italians, and the third has the nickname “Italian.” This connection creates a thematic coherence among three pieces of music that are really very different. It adds a dimension of enjoyment — perhaps even of aesthetics — to the concert-going experience.