Robert Schumann and His Role in Classical Music

Robert Schumann (1810–1856) was one of the foremost German Romantic classical music composers, although not everybody knew it at the time. His life story, punctuated as it was by periods of great emotional trauma, would have been number one on the self-help bestseller list. Here’s all you need to know about this certifiable eccentric. 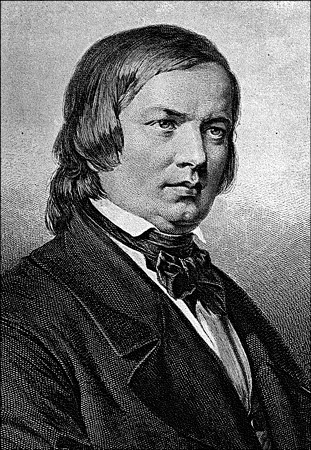 Schumann (“SHOE-mahn”) showed an incredible talent for the keyboard as a child. Unfortunately, Mrs. Schumann, like mothers of many musician wannabes even today, hoped for a more “upstanding” career for her son — such as law. Reluctantly, Robert shuffled off to law school at the University of Leipzig. Unfortunately for Mrs. S., her son met Felix Mendelssohn, also in Leipzig, and they became pals. Soon enough, like Berlioz, Schumann bagged school to be a musician.

Clara was a musical prodigy herself. At age 9, she’d toured Germany as a piano virtuoso; now, at 16, she had a good career going. As you can imagine, her father was less than ecstatic about the 25-year-old Schumann’s interest in her; “Cradle robber,” he undoubtedly muttered in German.

Clearly, Papa Wieck had missed out on one basic precept of child-rearing: If you forbid your teenager to do something, she’ll definitely do it. Sure enough, Clara married Schumann. It took five years and a lawsuit, but they finally tied the knot.

Personally, the following years were the happiest of Schumann’s life. Professionally, however, he blew it big-time. In an attempt to strengthen the ring finger on his left hand — which has less range of movement than any other finger — Schumann devised an invention. He attached a string to that finger and tied the other end to the ceiling while he slept. In theory, this contraption would gradually stretch the tendon in his hand and give him more flexibility. In practice, he completely paralyzed his finger.

With his piano career trashed, Schumann turned his attention full-time to composition. He wrote mostly piano pieces, plus four fine symphonies and a terrific piano concerto.

In the true Romantic tradition, expressing emotion in music was more important to Schumann than form, reason, or logic. And Schumann wasn’t lacking emotions to express; his personality swung wildly between two poles — one extroverted and hard-working, the other languid and self-absorbed. He felt as though he were two different people — in fact, he even gave names to his two characters: Florestan for the outgoing one and Eusebius for the introverted one.

These days, there is a clinical term for Schumann’s problem: He was bipolar. (Beethoven may have been, too.) Unfortunately, his manic depression was accompanied by hallucinations later in his life. At 44, in the throes of midlife crisis, Schumann tried to kill himself by throwing himself into the Rhine River.

Not having read Berlioz’s biography, however, he didn’t realize how ineffectual self-hurling can be; like Berlioz, Schumann was fished out of the water, bedraggled but alive. Alas, his final two years of life were spent in an asylum.

Schumann’s best works are his cycles (groups) of pieces for solo piano. Listen especially to these pieces:

And check out these works calling for full orchestral forces: