Classical music is daunting to some. Here’s a little orchestration made easy. In addition to volume and speed, another important factor in determining how classical music sounds is who’s playing it. That doesn’t mean people; it means instruments.

Orchestration is the art of assigning all the notes in a particular piece of music to the different players of the orchestra. Depending on how the composer makes these assignments, she can completely change the effect that the music has on the audience. The same notes that sound nasal and sharp when played on an oboe may sound smooth and sweet when played on a flute.

Multiply those variations by the 30-odd different kinds of instruments in a standard orchestra, and you get a hint of the incredible possibilities available to the composer.

When you orchestrate, you write down each player’s part on a gigantic sheet of staff-lined music paper that looks like this. 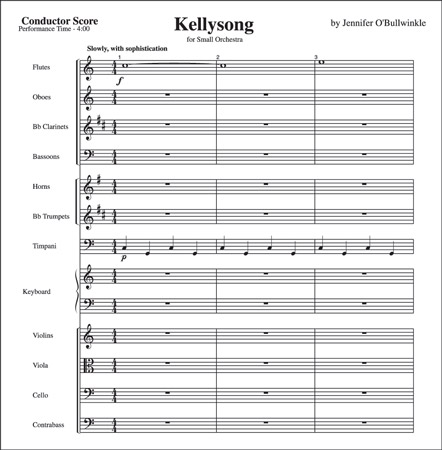 The flute player’s music is written on the top line; what the oboists play simultaneously is written just below that; the clarinetists’ music is just below that; and so on down the page. Orchestration is a difficult act, because you can’t just run over to the piano to discover how something you’ve just written sounds. You must “hear” your work in progress in your head — at least until the first day of rehearsal with the actual players.

These days, in the Broadway theater world, the composer is never the orchestrator; the composer writes the melody and maybe a piano part, and another person is hired to arrange that music for full orchestra.

But in the days of yore (yore great-grandparents, that is), composers almost always orchestrated their own music. Composers often served as their own copyists, too — charged with recopying every note off that full-page score into individual instrument parts, writing all the flute players’ notes on one set of pages, the clarinet’s notes on another set, and so on.

Whenever you listen to a piece of classical music, you’re hearing the representation of a huge amount of composer labor. You’re not hearing just melodies and harmonies; you’re hearing them played by a carefully chosen group of instruments.