Using the Double-Angle Identity for Cosine

Identities for angles that are twice as large as one of the common angles (double angles) are used frequently in trig. These identities allow you to deal with a larger angle in the terms of a smaller and more-manageable one.

A double-angle function is written, for example, as sin 2θ, cos 2α, or tan 2x, where 2θ, 2α, and 2x are the angle measures and the assumption is that you mean sin(2θ), cos(2α), or tan(2x). Because tangent is equal to the ratio of sine and cosine, its identity comes from their double-angle identities. 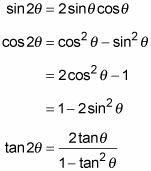 Finding the cosine of twice an angle is easier than finding the other function values, because you have three versions to choose from. You make your choice depending on what information is available and what looks easiest to compute. To show you where the first of the double-angle identities for cosine comes from, this example uses the angle-sum identity for cosine. Because the two angles are equal, you can replace β with α, so cos (α + β) = cosα cosβ – sin sinβ becomes

To get the second version, use the first Pythagorean identity, sin2 + cos2 = 1. Solving for sin2, you get sin2 = 1 – cos2. Putting this result back into the double-angle identity for cosine and simplifying, you get

Here’s an example showing off that advantage. Find cos 2α; the angle α is in the fourth quadrant, and sinα = –0.45.