Use the Law of Cosines with SSS

When you know the values for two or more sides of a triangle, you can use the law of cosines. In the following case, you know all three sides (which is called SSS, or side-side-side, in trigonometry) but none of the angles. What you see here is how to solve for the measures of the three angles in triangle ABC, which has sides where a is 7, b is 8, and c is 2. 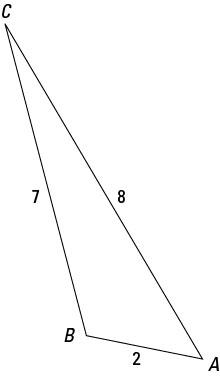 As you can see in the preceding figure, the triangle appears to have two acute angles and one obtuse angle, the obtuse angle being opposite the longest side.