Use the Law of Cosines for SSA

The Law of Cosines works well for solving triangles when you have two sides and an angle, but the angle isn’t between the two sides. In this case, the Law of Sines isn’t an option. Also, to solve a triangle that is SSA (or side-side-angle) using the Law of Cosines, you have to be careful to find the correct triangle — there are two possibilities.

Drawing a picture helps explain why the situation may have more than one answer. When you use this setup in an actual application, the correct answer is usually pretty clear.

The situation is that you know the measures of two of the sides to be 93 and 85 units. The angle opposite the side measuring 85 has a measure of 61 degrees. You see two ways of drawing the corresponding picture.

Find the missing parts of the triangle ABC that has sides a and b measuring 85 and 93, respectively, and angle A measuring 61 degrees. The preceding figure presents the situation.

The ambiguous case causes a bit of confusion. Why would you want two answers? The following example may help clear up this mystery. You really don’t want two answers. You just want the one that answers your question.

Slim and Jim are both sitting at the intersection of two roads, which forms a 50-degree angle. They leave the intersection at the same time — Slim in his old, slow, beat-up pickup truck, and Jim in his nifty-swifty Jeep. When Jim was 400 yards down the road, the two of them were 320 yards apart. How far had Slim driven at that point?

You definitely need a picture for this problem, so: 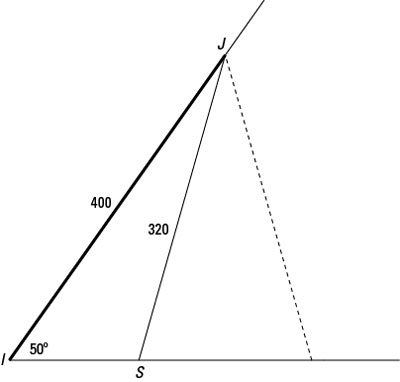 Slim (S) and Jim (J) travel on two roads that make a 50-degree angle at their intersection (I).

You can safely assume that Slim couldn’t have gone farther than Jim in his old clunker — unless his truck had hidden powers. Figure out how far Slim drove, the distance from I to S (this example refers to the distance as j to be consistent with the triangle labels) by using the law of cosines. The side s is 400 yards, and angle I is 50 degrees.