You can use the graph of a trigonometry function to show sales amounts over a given period of time. Here’s an example: Even though people in many parts of the world play soccer year-round, certain times of the year show an increase in the sales of outdoor soccer shoes. Here’s a model for the sales of pairs of shoes where N is in millions of pairs and m is the month of the year: N(m) = 44 sin (0.524m) + 70.

From the equation, you can tell that the average number of pairs sold is 70 million, which is the vertical shift upward. That number fluctuates between 26 million and 114 million, which you find by adding and subtracting the amplitude, 44, from the average. The period of this model is

or 12 months. The following figure shows a graph of this function. 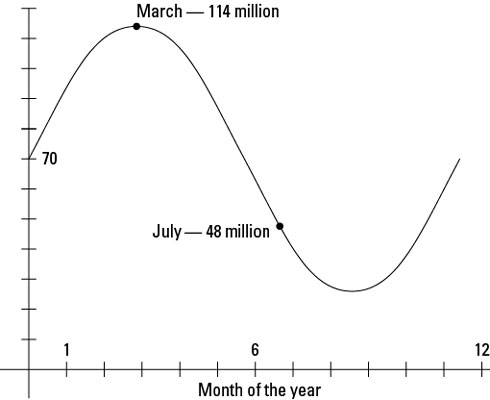 The sales of soccer shoes in millions of pairs.

A graph like the one in the figure can help distributors and retailers with their plans for business.