Shift a Sine Function in a Graph

Playing around with the amplitude and period of the sine curve can result in some interesting changes to the basic curve on a graph. That curve is still recognizable, though. You can see the rolling, smooth curve crossing back and forth over a middle line.

In addition to those changes, you have two other options for altering the sine curve — shifting the curve up or down, or sideways. These shifts are called translations of the curve.

Sliding a function up or down on a graph

You can move a sine curve up or down by simply adding or subtracting a number from the equation of the curve. For example, the graph of y = sin x + 4 moves the whole curve up 4 units, with the sine curve crossing back and forth over the line y = 4. On the other hand, the graph of y = sin x – 1 slides everything down 1 unit. The following figure shows what the two graphs look like.

As you can see, the basic shape of the sine curve is still recognizable — the curves are just shifted up or down on the coordinate plane.

Sliding a function left or right on a graph 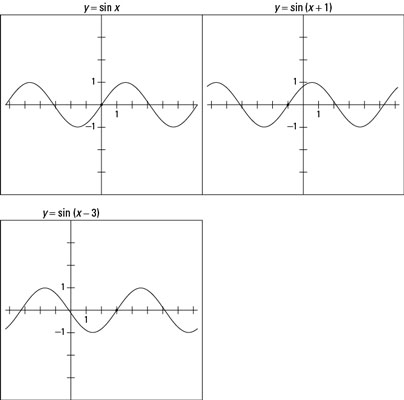 Take a look at the point marked on each graph in the above figure. This point illustrates how an intercept (where the curve crosses an axis) shifts on the graph when you add or subtract a number from the angle variable.