How to Use the Law of Sines with a Triangle

When you already know two angles in a triangle as well as one of the sides, such as in the case of ASA or AAS, you can use the law of sines to find the measures of the other two sides. This law uses the ratios of the sides of a triangle and their opposite angles. The bigger the side, the bigger its opposite angle. The longest side is always opposite the largest angle. Here’s how it goes.

The law of sines for triangle ABC with sides a, b, and c opposite those angles, respectively, says

For example, consider a triangle where side a is 86 inches long and angles A and B are 84 and 58 degrees, respectively. The following figure shows a picture of the triangle, and the following steps show you how to find the missing three parts. 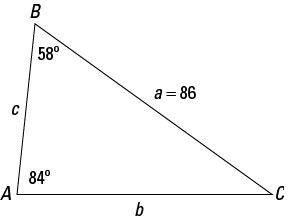