In trigonometry, multiplying the angle variable in a tangent function has the same effect as it does with sine and cosine functions — it affects the period of the function. If the multiple is 2, as in y = tan 2x, then the tangent function makes twice as many cycles in the usual amount of space. In other words, the period is p/2, which is the tangent’s usual period, p, divided by 2. 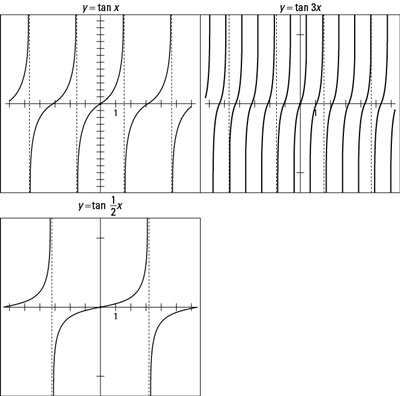 The graph of the tangent function and two multiples of the angle variable.

The preceding figure shows a few graphs to illustrate the effect of multiplying the angle variable by a number greater than 1 and then by a number between 0 and 1.

The graph of y = tan 3x doesn’t show all the asymptotes, but that graph has three times as many tangent curves as usual. The graph of

only half as many cycles — or it takes twice as long to complete one cycle.