Comparing Cosine and Sine Functions in a Graph

By: Mary Jane Sterling and
Updated: 12-21-2021
From The Book: Trigonometry For Dummies 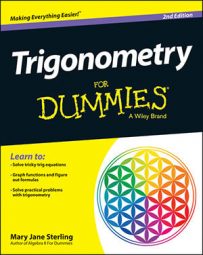 Explore Book Buy On Amazon
The relationship between the cosine and sine graphs is that the cosine is the same as the sine — only it’s shifted to the left by 90 degrees, or π/2. The trigonometry equation that represents this relationship is

Look at the graphs of the sine and cosine functions on the same coordinate axes, as shown in the following figure. The graph of the cosine is the darker curve; note how it’s shifted to the left of the sine curve. 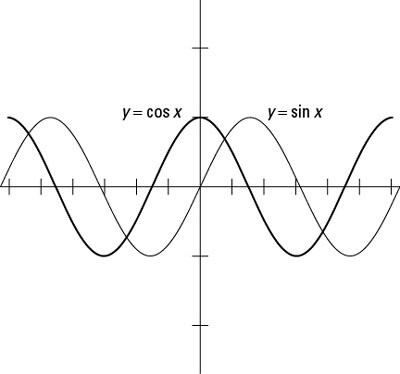 The graphs of y = sin x and y = cos x on the same axes
The graphs of the sine and cosine functions illustrate a property that exists for several pairings of the different trig functions. The property represented here is based on the right triangle and the two acute or complementary angles in a right triangle. The identities that arise from the triangle are called the cofunction identities.

The cofunction identities are as follows:

These identities show how the function values of the complementary angles in a right triangle are related. For example, cosθ = sin (90° – θ) means that if θ is equal to 25 degrees, then cos 25° = sin (90° – 25°) = sin 65°. This equation is a roundabout way of explaining why the graphs of sine and cosine are different by just a slide.

You probably noticed that these cofunction identities all use the difference of angles, but the slide of the sine function to the left was a sum. The shifted sine graph and the cosine graph are really equivalent — they become graphs of the same set of points. Here’s how to prove this statement.

You want to show that the sine function, slid 90 degrees to the left, is equal to the cosine function:

Mary Jane Sterling is the author of Algebra I For Dummies and many other For Dummies titles. She has been teaching mathematics at Bradley University in Peoria, Illinois, for more than 30 years and has loved working with future business executives, physical therapists, teachers, and many others.