A time chart (also called a line graph) is a statistical display used to examine trends in data over time (also known as time series data). Time charts show time on the x-axis (for example, by month, year, or day) and the values of the variable being measured on the y-axis (like birth rates, total sales, or population size). Each point on the time chart summarizes all the data collected at that particular time; for example, the average of all pepper prices for January or the total revenue for 2010.

To interpret a time chart, look for patterns and trends as you move across the chart from left to right. 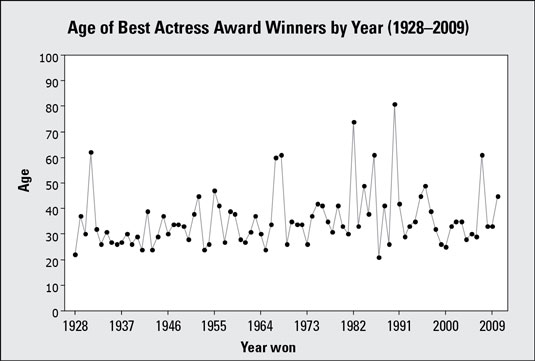 The time chart in the figure shows the ages of the Best Actress winners, in order of year won, from 1928–2009. Each dot indicates the age of a single actress, the one that won the Oscar that year. You see a bit of a cyclical pattern across time; that is, the ages go up, down, up, down, up, down with at least some regularity. It’s hard to say what may be going on here; many variables go into determining an Oscar winner, including the type of movie, type of female role, mood of the voters, and so forth, and some of these variables may have a cyclical pattern to them.

The figure also shows a very faint trend in age that is tending uphill, indicating that the Best Actress Award winners may be winning their awards increasingly later in life. Again, you shouldn’t make too many assumptions from this result because the data has a great deal of variability.

As far as variability goes, you see that the ages represented by the dots do fluctuate quite a bit on the y-axis (representing age); all the dots basically fall between 20 and 80 years, with most of them between 25 and 45 years. This goes along with the descriptive statistics found in the above figure.