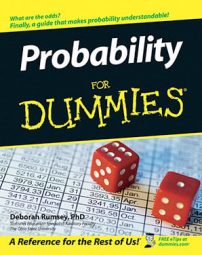 Explore Book Buy On Amazon
Remember the movie National Lampoon's Vegas Vacation, when gambling fever consumes Chevy Chase's character, Clark W. Griswold? He goes on a losing streak to beat all losing streaks while his son, Rusty, wins four cars by playing the slot machines. Maybe Clark would have done better if he had read Probability For Dummies. In this article, you'll discover the basics of slot machines and how they work, so that you can get past the myths and develop a sound strategy based on probability.

When casinos advertise that their slot machines pay out an average of 90 percent, the fine print they don't want you to read says that you lose 10 cents from each dollar you put into the machines in the long term. (In probability terms, this means that your expected winnings are minus 10 cents on every dollar you spend every time the money goes through the machines.)

How many pulls on the machine does your $100 give you at this rate? Each time you have less money to run through the machine, so you have fewer pulls left. If you insert $1 at a time, you can expect 972 total pulls in the long term with these average payouts (that's the total pulls in 44 rounds). But keep in mind that casinos are designing slot machines to go faster and faster between spins. Some are even doing away with the handles and tokens by using digital readouts on gaming cards that you put into the machines. The faster machines can play up to 25 spins per hour, and 972 spins divided by 25 spins per minute is 38.88 minutes. You don't have a very long time to enjoy your $100 before it's gone!

The worst part? Casinos often advertise that their "average payouts" are as high as 95 percent. But beware: That number applies only to certain machines, and the casinos don't rush to tell you which ones. You really need to read or ask about the fine print before playing. You can also check the information on the machine to see if it lists its payouts. (Don't expect this information to be front and center.)

It's best to have a strategy

Basically, when it comes to slot machines, strategy boils down to this: Know the rules, your probability of winning, and the expected payouts; dispel any myths; and quit while you're ahead. If you win $100, cash out $50 and play with the rest, for example. After you lose a certain amount (determined by you in advance), don't hesitate to quit. Go to the all-you-can-eat buffet and try your luck with the casino food; odds are it's pretty good.

The machines that have the higher denominations usually give the best payouts. So, between the nickel and quarter slots, for example, the quarter slots generally give better payouts. However, you run the risk of getting in way over your head in a hurry, so don't bet more than you can afford to lose. The bottom line: Always choose a level that you have fun playing at and that allows you to play for the whole time you've allotted.

Deciding how many coins to play at a time

When deciding on the number of coins you should play per spin, keep in mind that more is sometimes better. If the slot machine gives you more than twice the payout when you put in twice the number of coins, for example, you should max it out instead of playing single coins, because you increase your chances of winning a bigger pot, and the expected value is higher. If the machine just gives you k times the payout for k coins, it doesn't matter if you use the maximum number of coins. You may as well play one at a time until you can make some money and leave so your money lasts a little longer.

For example, say a quarter machine pays 10 credits for the outcome 777 when you play only a single quarter, but if you play two quarters, it gives you 25 credits for the same outcome. And if you play the maximum number of quarters (say, four), a 777 results in 1,000 credits. You can see that playing four quarters at a time gives you a better chance of winning a bigger pot in the long run (if you win, that is) compared to playing a single quarter at a time for four consecutive tries.

What about penny slot machines? Although these profess to require only a penny for a spin, you get this rate only if you want to bet one penny at a time. The machines entice you to bet way more than one penny at a time; in fact, on some machines, you can bet more than 1,000 coins (called lines) on each spin — $10 a shot here, folks. Because these machines take any denomination of paper bill, as well as credit cards, your money can go faster on penny machines than on dollar machines because you can quickly lose track of what you spend. Pinching pennies may not be worth it after all.

Deborah Rumsey has a PhD in Statistics from The Ohio State University (1993). Upon graduating, she joined the faculty in the Department of Statistics at Kansas State University, where she won the distinguished Presidential Teaching Award and earned tenure and promotion in 1998. In 2000, she returned to Ohio State and is now a Statistics Education Specialist/Auxiliary Faculty Member for the Department of Statistics. Dr. Rumsey has served on the American Statistical Association’s Statistics Education Executive Committee and is the Editor of the Teaching Bits section of the Journal of Statistics Education. She’s the author of the books Statistics For Dummies and Statistics Workbook For Dummies (Wiley). She also has published many papers and given many professional presentations on the subject of Statistics Education. Her particular research interests are curriculum materials development, teacher training and support, and immersive learning environments. Her passions, besides teaching, include her family, fishing, bird watching, driving a new Kubota tractor on the family “farm,” and Ohio State Buckeye football (not necessarily in that order).