How to Interpret a Statistical Bar Graph

A bar graph (or bar chart) is perhaps the most common statistical data display used by the media. A bar graph breaks categorical data down by group, and represents these amounts by using bars of different lengths. It uses either the number of individuals in each group (also called the frequency) or the percentage in each group (called the relative frequency).

An example of a bar graph would be to show how much money people in the United States spend on transportation to get back and forth to work. The Bureau of Transportation Statistics (did you know such a department existed?) conducted a study on transportation in the U.S. recently, and many of its findings are presented as bar graphs like the one shown in this image: 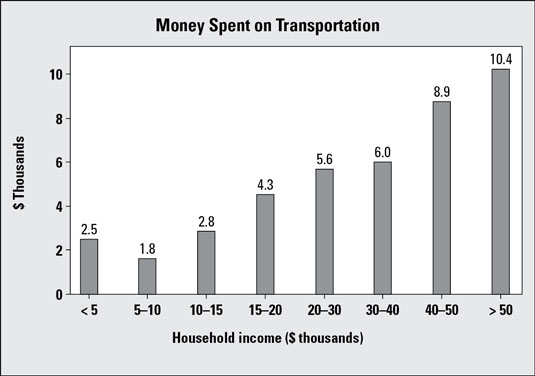 This particular bar graph shows how much money is spent on transportation for people in different household-income groups. It appears that as household income increases, the total expenditures on transportation also increase. This makes sense, because the more money people have, the more they have available to spend.

But would the bar graph change if you looked at transportation expenditures not in terms of total dollar amounts, but as the percentage of household income? The households in the first group make less than $5,000 a year and have to spend $2,500 of it on transportation. (Note: The label reads "2.5," but because the units are in thousands of dollars, the 2.5 translates into $2,500.)

This $2,500 represents 50% of the annual income of those who make $5,000 per year; the percentage of the total income is even higher for those who make less than $5,000 per year. The households earning $30,000–$40,000 per year pay $6,000 per year on transportation, which is between 15% and 20% of their household income. So, although the people making more money spend more dollars on transportation, they don't spend more as a percentage of their total income. Depending on how you look at expenditures, the bar graph can tell two somewhat different stories.

Another point to check out is the groupings on the graph. The categories for household income as shown aren't equivalent. For example, each of the first four bars represents household incomes in intervals of $5,000, but the next three groups increase by $10,000 each, and the last group contains every household making more than $50,000 per year. Bar graphs using different-sized intervals to represent numerical values (such as the above image) make true comparisons between groups more difficult. (However, the government probably has its reasons for reporting the numbers this way; for example, this may be the way income is broken down for tax-related purposes.)

One last thing: Notice that the numerical groupings in the image overlap on the boundaries. For example, $30,000 appears in both the 5th and 6th bars of the graph. So, if you have a household income of $30,000, which bar do you fall into? This kind of overlap appears quite frequently in graphs, but you need to know how the borderline values are being treated. For example, the rule may be "Any data lying exactly on a boundary value automatically goes into the bar to its immediate right." (Looking at the image, that puts a household with a $30,000 income into the 6th bar rather than the 5th.)