How to Interpret a Scatterplot 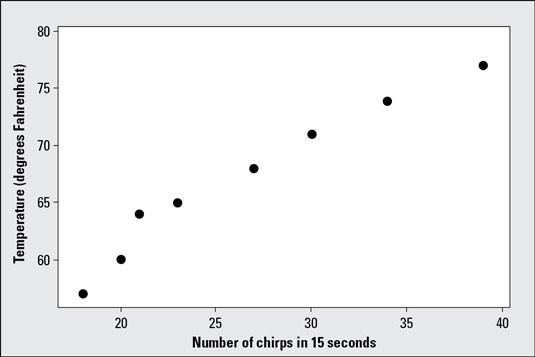 Scatterplot of outdoor temperature in relation to cricket chirps
The above figure shows a scatterplot for the temperature and cricket chirps data listed in the following table. Because the data are ordered according to their X-values, the points on the scatterplot correspond from left to right to the observations given in the table, in the order listed.

You interpret a scatterplot by looking for trends in the data as you go from left to right:

A linear relationship between X and Y exists when the pattern of X- and Y-values resembles a line, either uphill (with a positive slope) or downhill (with a negative slope).

Scatterplots show possible associations or relationships between two variables. However, just because your graph or chart shows something is going on, it doesn’t mean that a cause-and-effect relationship exists.

If this doctor really wants to know if it’s the vitamin C that’s doing it, they need a well-designed experiment that rules out these other factors.